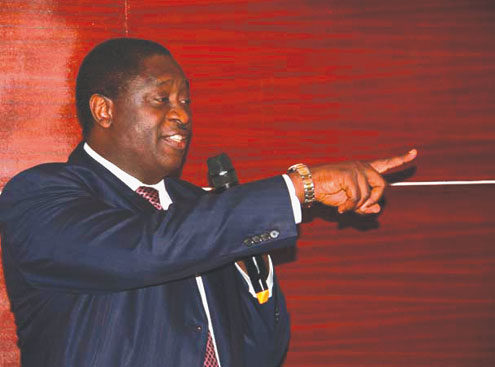 Bi-Courtney Highway Services Limited, concessionaire of the Lagos-Ibadan expressway,Â  has begun reconstruction, expansion and modernisation of the 105-kilometre road. TheÂ  company rolled its equipment onto the highway on Friday 26 November. And as ChairmanÂ  of Bi-Courtney Group, Dr. Wale Babalakin told editors in Lagos lastnight, there willÂ  be no stopping work on the project until it is completed from the Lagos end at OjotaÂ  to the Ibadan toll gate. The ambitious project is not expected to exceed four years.

The Federal Government approved concessioning of the delapidated 32-year oldÂ  expressway to Bi-Courtney in April last year in what marked the take-off of itsÂ  policy to concession federal highways to private operators. The agreement betweenÂ  the two parties was signed on 26 May, 2009. By the agreement, Bi-Courtney willÂ  reconstruct, modernise and expand the expressway under a build, operate andÂ  transfer, BOT, arrangement spanning 25 years. The new-look highway is expected toÂ  have two additional lanes on either side and lighting between 7p.m. and 6a.m., to beÂ  provided through a gas-fired plant.

The concessionaire is also expected to provide certain services and facilities thatÂ  will improve safety and security of motorists and other road users. The facilitiesÂ  include controlled rest areas with eateries and conveniences, clinics and emergencyÂ  ambulances, emergency communications equipment, electronic traffic control andÂ  enforcement measures and flyovers and pedestrian bridges at designated locations.Â  There will be parking areas for heavy vehicles and a special one-stop parking plazaÂ  where all road users can satisfy their shopping, eating and relaxation needs.

Bi-Courtney will be wholly financing the reconstruction project, expected to cost aÂ  minimum of N90 billion. It will recoup its money mainly from tolls and fromÂ  secondary avenues like advertising and the right of way mandate. Babalakin disclosedÂ  yesterday that there will be four toll plazas on the entire stretch to be located atÂ  the two major entry and exit points in Lagos (Ojota) and Ibadan and the SagamuÂ  interchange and Ogere.

He admitted there would be challenges of traffic management on the highway while theÂ  road, notorious already for traffic snarls, is being reconstructed. The Bi-CourtneyÂ  chairman, however, said the company will be deploying traffic managers at strategicÂ  points to ensure there is minimum discomfort to road users. â€œWe are taking the issueÂ  of traffic management seriously and are making every effort to see motorists andÂ  road users generally do not suffer unnecessarily while we work there,â€ he promised.

There will be no total closure of any part of the road at any point in time. Rather,Â  as Babalakin explained, a lane or two on either side of the highway will always beÂ  made available for motoristsâ€™ use while Bi-Courtneyâ€™s plants grind on on the portionÂ  under construction. He appealed for understanding, patience and sacrifice from usersÂ  of the road during the project period, as a holistic mend of the road now would saveÂ  a lot of lives and enhance social and economic benefits in the long run. He assuredÂ  that even before the third quarter of next year, Bi-Courtney would have fixed allÂ  potholes on the expressway and relieved users of the agony and dangers theyÂ  currently experience plying it.

Babalakin identified the two major causes of traffic gridlock on the road as theÂ  religious bodies which have located their worship centres along there, and oilÂ  tanker drivers who either park their vehicles on the shoulders to reduce the roadÂ  width or are regularly involved in accidents that seriously impede vehicularÂ  movement. The concessionaireâ€™s traffic managers have been meeting with these bodiesÂ  who, the group chairman said, have been co-operative.