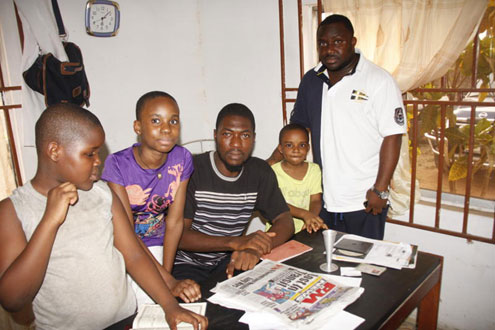 The Dubai-based Nigerian family reported missing while travelling from Lagos to Asaba last week hasÂ  been found at last.

However, it was a tale of tragedy as three of the travellers â€“ the mother, Edna, a Dubai-based staffÂ  of Standard Chartered Bank, her cousin, Chinyere, who had lost her only daughter last December,Â  andÂ  the driver of the chartered Toyota Camry saloon car, Godfrey Inalegwu â€“ were found dead in a villageÂ  near Okada after their car plunged into a river, while trying to avoid a pothole. Only the threeÂ  children â€“ Loveth, 11, Precious 8 and Golden 6Â  â€“ were rescued and taken to a private hospital inÂ  Ofumwegbe town, near Benin City, Edo State, Southsouth Nigeria. Their escape was simply miraculous,Â  according to the rescuers.

P.M.NEWS in its Wednesday, 2 February 2011 edition, reported that the family was missing last weekÂ  Wednesday during their trip from Lagos to Asaba in aÂ  Toyota Camry saloon car with registration numberÂ  Lagos KU 108 EKY.

The husband of the Dubai banker, himself an accountant, Mr. Ugochukwu Onyeocha had told P.M.NEWS thatÂ  when his family left Lagos about 10.00 a.m in theÂ  car, he communicated with his wife on phone twice,Â Â  about 11 in the morning and 3 p.m.

HeÂ  sensedÂ  something was wrong after he lost contact thereafter, believing that the wife was in anÂ  area where there was no phone network or that her phone was switched off. In the morning, he wasÂ  awoken by a phone call from his mother-in-law that his wife and the children were yet to arrive Asaba.Â  This prompted Onyeocha to involve the police. His report to the police at the State CriminalÂ  Investigation Department, SCID, Panti, Yaba, LagosÂ  however yielded no immediate clue as to theÂ  whereabouts of his family.

The police investigators told Onyeocha that the tracker in the Toyota car had shown that the car andÂ  the occupants got missing in a village called Otu Costain in Edo State.

The missing car was located at Okada, near Benin City.

It was discovered that the family had an accident and their vehicle plunged into a river.Â  TheÂ  survivors were later taken to Emiloju Medical Centre, in Ofumwegbe town, near Benin City, Edo State.

The Medical Director of the centre, Dr. Mohammed Yakubu,Â  treatedÂ  the three children.

According to him, â€œOn 26 January, 2011 at about 7.30 p.m, these three children were brought here byÂ  kind-hearted villagers. They were unconscious. The villagers said the car in which they wereÂ  travelling skidded intoÂ  a river as the driver triedÂ  to manoeuvre a pothole on the road,â€ MohammedÂ  said.

The doctor stated that the villagers with the help of policemen from a nearby police station were ableÂ  to recover the car. But their mother, her cousin and the driver were dead. Only the three childrenÂ  were grasping for breath.

Dr. Mohammed said he was able to revive the three children and they were recuperating in his hospital,Â  this morning.

The doctor added that the villagers with the help of policemen from Iguobazuwa DivisionalÂ  Headquarters, Edo State, moved the three corpses to the mortuary of another hospital near the village.

As at the time of going to press, the father, Onyeocha, P.M.NEWS correspondent and Dr. Mohammed wereÂ  on their way to the hospital where the corpses were kept.

The tragedyÂ  has confirmed the fears of Nigerians abroad, wary of returning homeÂ  because of theÂ  epidemic of armed robbery, fraudsters, political violence and carnage on theÂ  roads.