Fashola, others receive certificate of election 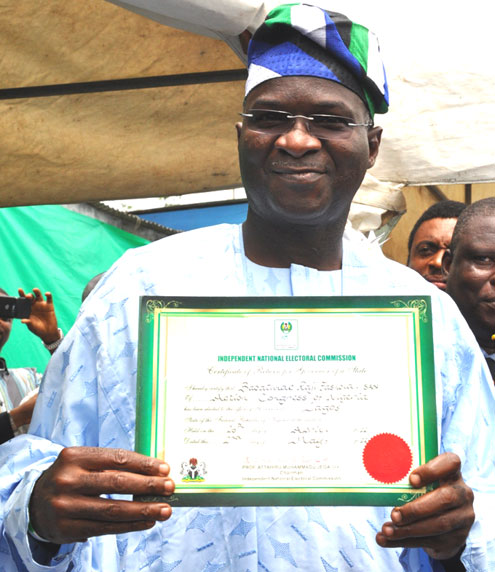 Lagos State Governor, Mr. Babatunde Fashola (SAN), Monday received his re-election certificate as Governor of Lagos State from the Independent National Electoral Commission with a promise to continue the transformation already begun during his first tenure. In a short remark after the presentation ceremony at the State INEC office at Sabo Yaba, Governor Fashola also congratulated INEC for conducting an election adjudged by majority of Nigerians and international observers as credible, free and fair. â€œOn behalf of all the elected representatives of Lagos State who are incidentally all members of our Party, the Action Congress of Nigeria, I express my very profound gratitude to all Lagosians for the trust and overwhelming confidence you reposed in us.

The most appropriate way to express this is to continue what we have been doing and as leader of that team, I promise to do just thatâ€. the Governor said. Thanking the leadership and adhoc staff of INEC for a good job, Governor Fashola declared, You have delivered an election that is credible. The message of political stability which the election portrays is already showing. It will set us on the path of progress.

The Governor prayed for the members of the National Youth Service Corps who lost their lives in parts of the country while serving as ad-hoc staff of INEC saying the glory of the general elections belonged to them. He prayed for the repose of their souls and for divine support for the families they left behind The Governor, however, urged the electoral body to begin the work of updating the Votersâ€™ Register pointing out that the only way to continue to improve on the good works of the Commission was to begin in time to put the records straight before the next elections.

Governor Fashola also congratulated the opposition for participating in the elections and showing the spirit of sportsmanship in defeat adding, â€œYour participation made the exercise challenging and robust. Without your participation, there would have been no contest and without a contest, there would be no winner or loserâ€. Governor Fashola also extended a hand of fellowship to the opposition saying, â€œOur doors are open for all those ideas which you have for the progress and development of Lagos and Nigeria.

We welcome them all for the development of Lagos State so that we can deliver to Lagos State and all those who have chosen to make her their home a Better Rewarding Futureâ€. Others who received their certificate of election included the Senators-Elect of Lagos East, Mr. Gbenga Ashafa, Lagos West, Senator Ganiyu Olanrewaju Solomon and Lagos Central, Chief (Mrs) Oluremi Tinubu, all the House of Representative elects for the Federal Constituencies in the State as well as the members-elect of the State House of Assembly.

In a short response on behalf of the elected members of the National Assembly, Hon. Segun Gbajabiamila representing Surulere Federal Constituency 11, thanked INEC for the success of the elections adding that â€œalthough we are not there yet, what we have achieved is adjudged to be a great improvement and I hope that it will become even better and more credible in futureâ€. Also present at the occasion were members of the State Executive Council, Local Government Chairmen, officials of INEC like National Commissioner in-Charge of Lagos, Oyo and Ondo States, Prince Adedeji Shoyebi, the Residential Electoral Commissioner in Lagos State, Dr Adekunle Ogunmola and Administrative Secretary (INEC) Lagos, Alhaji M. A.Y Umar, family members and associates of the elected members, Party leaders and top government functionaries.