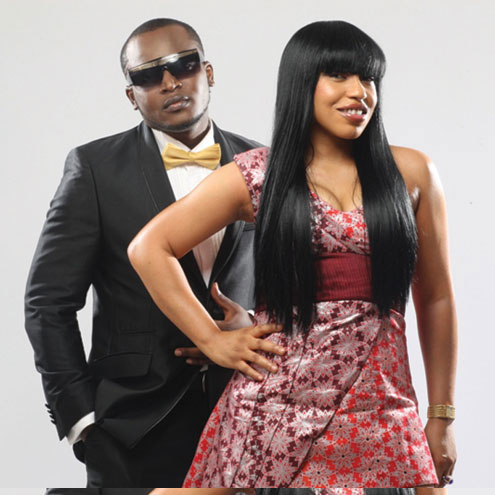 Rita Dominic and eLDee with the Headie.

The duo of talented actress Rita Dominic and contemporary producer and rapper eLDee will host the sixth edition of the The Headies, the organiser has announced.

Ayo Animashaun, Executive Producer of the award, explained that â€œEldee and Rita Dominic will be hosting this yearâ€™s awards and we are proud to be working with such exceptional talentsâ€.

He also announced that this yearâ€™s awards will hold in September instead of its usual May due to the last general elections.

The awards, which started in 2006, has become one of the top events in the music industryâ€™s calendar. The awards ceremony is known for its innovative concepts which have revolutionised the way award shows are organised in the country.

â€œWe are making adequate preparations to ensure that this yearâ€™s event is bigger and better than previous years,â€ Animashaun said, adding â€œyou donâ€™t want to imagine what weâ€™re cooking this year. If there is any gospel the award has preached over the years, it is the power of possibilities.â€

Meanwhile, Rita Dominic and eLDee have kicked off a series of meetings with the awards committee.â€œI feel really excited about hosting this yearâ€™s awards. I love the music industry, and I appreciate the fact that The Headies is one of the initiatives that sees to appreciating deserving talents. The team is well organized, and I am already bonding with eLDee,â€ the Nollywood actress said.Dominic has an unrepentant love for the Entertainment industry. She has starred in more than 100 movies since she started her career in 1998. Paired with Dominic to take the audience through this yearâ€™s event is Osun State born Lanre Dabiri popularly known as eLDee.

Dabiri is an original member of the band Trybesmen. With four albums to his credit, eLDee has over the years become a force to reckon with in the music industry.

â€œI have been to so many editions of The Headies, and I feel really honored hosting this yearâ€™s show. Rita Dominic is a good actress and I like the fact that the organisers scout for hosts from different sectors of the Entertainment industryâ€ eLDee says. Past hosts of The Headies include Darey (2006), Dbanj and Tana (2007), Dakore and Basket Mouth (2008), Banky W and Kemi Adetiba (2009). A total of 22 plaques (called Headies) will be given out to deserving music industry professionals whose works have been screened by a team of select critics and practitioners commissioned by the organisers.