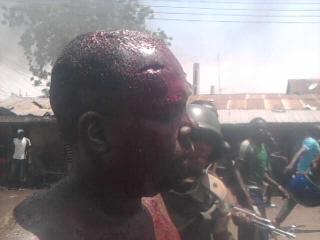 The suspected Boko Haram member who drove a bomb-laden car into the Kaduna office of Thisday today was arrested by vigilant bystanders, before he could flee the scene.

P.M.NEWS gathered that after the suspected bomber parked a Honda Civic car in the newspaper’s compound located at Ahmadu Bello Way, Kaduna, he quickly came out of the car and tried to get away from the area. But some youths ran after him and asked him why he left his car there when he does not have an office in the building.

P.M.NEWS gathered that as they were beating him and dragging him towards the main road, he kept warning them that the car would explode. Suddenly the car exploded, killing 3 persons in its vicinity.

The suspect who was wearing a blue kaftan and reportedly spoke impeccable English was handed over to soldiers and policemen who drove him to the police headquarters in Kaduna.

When the car was searched two gas cylinders were found in its booth. As at the time of going to press, the man whose identity had not been released was still being interrogated.

The state Police Commissioner is expected to brief the press anytime from now on the police findings.