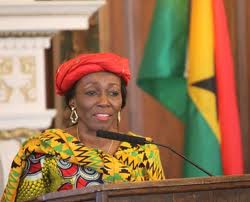 The wife of Ghana’s former leader John Jerry Rawlings was nominated as a presidential candidate by an upstart political party on Saturday, highlighting divisions in the ruling NDC ahead of December polls.

Nana Konadu Agyemang had sought to run on the National Democratic Congress party ticket, but was trounced in a 2011 primary battle by John Atta Mills, Ghana’s then-president who died in July following an illness.

After being beaten by Mills, Agyemang helped launch the rival National Patriotic Party and had been flirting for months with a presidential run, while maintaining ties to the NDC.

She formally resigned from the ruling NDC on Thursday and was unanimously endorsed for president by the rival party at its convention outside Accra on Saturday.

“This party was born out of the need to transform Ghana,” she told a crowd of several thousand delegates assembled at the Kumasi Sports Stadium.

“Poverty and discontent remain rife among Ghanaians and I promise that under the NDP government and my leadership we will eradicate these endemic challenges,” she said in accepting the nomination.

Her husband, a national icon who founded the NDC and has led Ghana both as a military ruler and an elected president, has sent mixed messages about his allegiances as regards the December vote.

He praised his wife’s party at the convention on Saturday, saying it “will restore hope and the moral values that the country needs to move forward.”

While he had openly fallen out with the late Mills, Rawlings was on hand on October 4 when President John Dramani Mahama unveiled the NDC’s manifesto, apparently offering support for the president’s election bid.

He further praised Mahama on Saturday.

“Thank God John Mahama has taken over and agreed that he will restore hope in the NDC… Should he win re-election, then we can join hands again,” he said.

The December polls are widely expected to be close and experts have said the NDC may struggle to retain power if Rawlings throws his influence behind another candidate.

Ghana, a country of more than 20 million, has been seen in recent years as a rare example of stable democracy in West Africa. It began significant oil production in 2010.

Nana Konadu, was born on the November 17, 1948 and attended Achimota School, where she first met Jerry John Rawlings.

She continued at the Kwame Nkrumah University of Science and Technology, where she read Art, specializing in Textiles. She was a student leader and an executive of her Hall of residence, Africa Hall

She got married to Jerry John Rawlings, an Airforce Officer, in 1977, giving birth to her first child Ezenator in 1978. Two other daughters and a son followed later; Yaa Asantewaa, Amina and Kimathi. She also has some grandchildren.

Under Jerry Rawlings in 1982, she became the president of the 31st December Women’s Movement. She remains the leader of the movement till date. She was elected 1st Vice Chairperson of her party in 2009 during the second term of her National Democratic Congress (NDC) party’s tenure in office under Prof. John Evans Atta Mills.

She challenged John Atta Mills for the party’s ticket at the congress last year July, but lost.