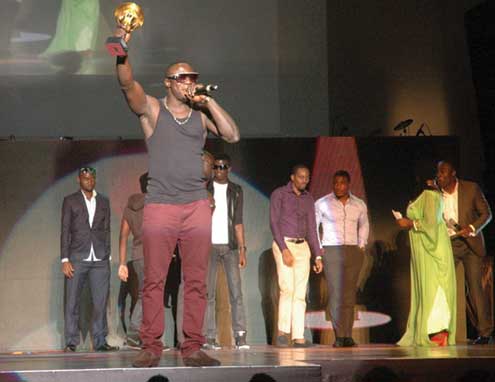 Hosted by rap star M.I and music diva Omawumi, the night was a special one for the likes of PSquare, Wizkid and Vector who turned the biggest winners of the night with two awards apiece. Apart from emerging as the Hip-Hop World Revelation of the Year, Wizkid also went home with the Artiste of the Year title.

The Album of The Year and Best R&B/Pop Album went to PSquare (The Invasion); the Best Music Video (an award which went to the director) was won by their brother, Jude ‘Engees’ Okoye. Also on the winners’ list was ex-Square Records boy, May D, who won the Best R&B Single award with Soundtrack.

D’banj’s Oliver Twist was the Song Of The Year; Brymo scored the Recording of The Year title with Ara;  Iyanya’s Kukere won Best Pop Single, Tee-Y Mix had his first main award with Naeto C’s Super C Season which fetched him Producer of The Year.

Best Rap Album was Ice Prince’s E.L.I; Sound Sultan Ft. Excel & Flavour’s Orobo won Best Collabo; Best Street Hop goes to Gaga Crazy by Chuddy K and African Artiste of The Year, a non-Nigerian category went to Ghanaian Sarkodie with Azonto. The coveted Next Rated award which comes with the special prize of a Hyundai Sonata was won by Davido.

The highlight of the night was the live performances by the likes of The Headies Rookie Competion 2012 joint winners, Burna Boy and DammyKrane, Chidinma, Bez, Praiz, Brymo, Davido, Timi Dakolo and the EME crew led by Banky W.

Though, there were some minor technical hitches majorly with the absence of Femi Kuti, Afrobeat legend expected to be inducted into the Hall of Fame. Apart from that, it was another successful show packaged by Smooth Promotions led by Ayo Animashaun.