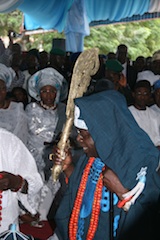 Asiwaju Bola Ahmed Tinubu has been described as an icon and an irreplaceable dogged fighter who has been using his God-given wisdom to fight for justice and sustainability of democracy in Nigeria.

This commendation was made by the Alake of Egbaland, Oba Michael Aremu Gbadebo Adedotun, Okukenu IV, during the conferment of a chieftaincy title on the ACN chieftain and his wife, Senator Oluremi Tinubu, in Abeokuta, the Ogun State capital.

Abeokuta stood still as distinguished personalities from different parts of the country gathered at the Ake palace to witness the conferment.

Some of the top politicians that graced the occasion include the presidential candidates of the Action Congress of Nigeria, ACN and that of the Congress for Progressive Change, CPC during the last election, Mr. Nuhu Ribadu and General Muhammadu Buhari (retd.)

Speaking earlier at a church service held at St. Peter’s Cathedral Church, Ake, Abeokuta, the officiating minister, Rev. Samuel Ogundeji of the Egba West Diocese, urged the monarch to thank God for sparing his life till date and enjoined him to be opened to criticism.

“It is not by your power that you are alive today but that of God. You must always be thankful to Him. Don’t take God’s blessing for granted and remember that in the cause of discharging your duties as the leader of Egbaland, you might have offended many people. Learn how to forgive people so that God will forgive you too. It is expected from all of us to thank God in whatever position we find ourselves, that is the only way to express appreciation to the Most Supreme”, the cleric posited.

He also warned the state governor, Senator Ibikunle Amosun to always listen to the people and keep away from political sycophants.

“And to you, Mr. governor, always listen to the people because they are the one that elected you into the office. Most of the leaders today err because of those they packed around themselves who will be telling them what will please them rather than what will be pleasant to the generality of the people. In all your undertakings, always remember that both you and the monarch have someone to account to,” he added.

During the coronation ceremony, Oba Gbadebo prayed for the new chiefs as he performed the traditional rites on the new Aare Ago while Iyalode of Egbaland performed that of Senator Oluremi Tinubu.

Dignitaries at the occasion include the Oba of Lagos, Oba Rilwan Akiolu, who led the white cap chiefs from Lagos; Olu of Ilaro, Oba Kehinde Ojugbele; Oru of Imoru, Oba Munirudeen Adepoosi Bashorun and other monarchs from the Southwest states.

Others are the ACN governors from the Southwest states and their deputies, the National Chairman of the party, Chief Bisi Akande, first civilian governor of Lagos State, Alhaji Lateef Kayode Jakande, Alhaji Lai Mohammed, ACN Publicity Secretary, serving and former lawmakers
both at the federal and state levels, local government chairmen and councillors from all the ACN controlled states, diplomats, market men and women, artisans, students and various political groups that has Tinubu as their founder or leader.

Speaking with P.M.NEWS at the occasion, the Publicity Secretary of the Action Congress of Nigeria, Alhaji Lai Mohammed, extolled the virtues of Tinubu and described him as a loyal and righteous leader. “Tinubu deserves the title. He is a true leader and a democrat to the core. He has lived all his life for the liberation of the Yoruba nation and the country at large. We are here to celebrate an icon and a selfless leader who has dare many oppressors and still barking on any one that still have it in mind to oppress others.”

When asked to comment on the death of one of the stalwarts of the party who was assassinated last night by unidentified gunmen, the Kwara-born politician said: “Toyin’s death is a catastrophy, not only to his family members, but to the party as a whole. If this has happened some days back, we would have postponed this coronation, but God knows best.”

On the band stand to entertain the guests was the Juju king, Sunny Ade who dished out melodious tunes to the satisfaction of the crowd.