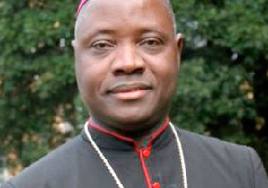 Nigerian Catholic archbishop Ignatius Ayau Kaigama on Monday condemned as “disturbing” and “shocking” twin attacks against a Christian church in a military barracks in Jaji, Kaduna state and wondered why most attacks by Boko Haram elements are staged successfully.

It is a big question that Archbishop Kaigama may not get an easy answer as gunmen suspected to be Boko Haram members also today staged a successful assault against the headquarters of Police SARS in Abuja, freeing 30 detainees.

Eleven people were killed and dozens more wounded on Sunday when two suicide bombers struck, destroying a Protestant church inside the Jaji barracks.

Although no group has claimed responsibility, the bombings were similar to previous attacks blamed on Islamist extremist group Boko Haram, whose campaign Kaigama called “disturbing” in its effectiveness.

“What is really disturbing is that in carrying out these attacks, members of Boko Haram seem to be sure of success,” the archbishop of Jos, who is also the head of the Nigerian bishops’ conference, told missionary news agency Fides.

“This is shocking because it is supposed that the police and the military are in charge of protecting the civilian population, but have now themselves become victims of Boko Haram attacks. We are really in trouble,” he said.

“These people are very daring. These criminals are able to renew themselves. They have gone from attacking innocent faithful in their churches to bringing the war within the military establishment,” he said.

Boko Haram has often targeted churches in its bloody insurgency, as well as police and other symbols of the establishment in Nigeria. The country, Africa’s most populous, is roughly divided between a mainly Muslim north and a predominantly Christian south.