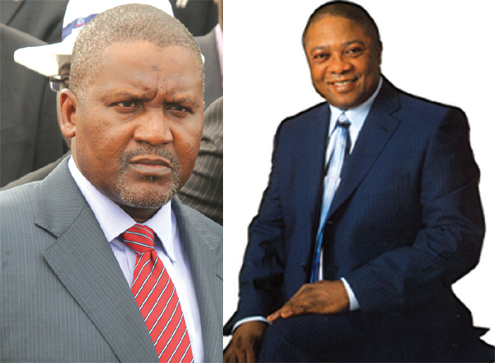 Dangote and Ibeto on a silent war in the cement industry

A silent war is currently brewing between cement manufacturing giant, Dangote Group and Ibeto Cement Company, the sole importer of bulk cement in the country.

Both companies are at loggerheads over who to blame for the current glut in the cement industry and what the government should do to encourage local production of cement.

The Dangote Group through its spokesman, Anthony Chiejina, Group Head, Corporate Communications, fired the first salvo when he blamed the glut on the continued importation of subsidised cement into the country.

But Dr. Ben Aghazu, Executive Director (Strategy and Public Affairs), Ibeto Cement Company, disagreed with the Dangote Group and accused it of laying the ground for government to ban the importation of cement into the country.

In a two-page statement published in a national daily today, Ibeto Cement berated Dangote Group for being afraid of competition and trying to instigate the federal government to wade in and stop the importation of bulk cement.

Ibeto Cement submitted that by its statement on the glut in the cement market, the Dangote Group, is trying to influence the Federal Government to cripple Ibeto cement by stopping the importation of cement into the country.

Chiejina maintained in an interview with TheNEWS magazine that Dangote Group’s Gboko cement plant (BCC) was shut because of a flood of imported cement, adding that staff had to be put on forced leave, pending when the situation improves.

The Port Harcourt-based cement bagging company, however, accused the Dangote Group of trying to influence the Federal Government to raise the duty and other taxes on imported cement in order to make imported cement costlier than Dangote Cement and thereby run it out of the market.

Investigation also revealed that a Federal High Court sitting in Abuja had in an out of court settlement in a suit filed by Ibeto Cement Company against the Federal Government for unjustly closing its cement bagging plant in Port Harcourt, ruled that the plaintiff (Ibeto Cement Company) be allowed to import 1.5 million tonnes of bulk cement per annum for the period of 1 October, 2007 to 30 September, 2017.

According to Ibeto Cement Company: “Dangote Group is also trying to influence the federal government to, in effect, invalidate the essence of the court order that authorises Ibeto Cement to import this small amount of cement until 30 September, 2017, by raising the duty and other taxes on imported cement so as to make the imported cement more expensive than Dangote Cement.”

Ibeto cement appealed to the federal government not to be misled in doing this “because doing so will go against the spirit of the out of court settlement agreement.”

Ibeto Cement Company also said that the Dangote Group by its statement, wanted the federal government to ban the importation of clinker or in the alternative drastically increase the duties and taxes on clinker imports so as to destabilise cement manufacturers in the Southsouth and maintain a monopolistic domination of the cement market in Nigeria.

“Time and unfolding events will show that Dangote Group is being extremely economical with the truth in this assertion. We have it on authority that the Dangote plant in Gboko (BCC) is programmed to shut down for turn around maintenance only and will resume production when the maintenance has been completed.

“Since we are the only importer of bulk cement in the country, it is clear that Dangote Group is blaming Ibeto Cement for their inability to eliminate competition in the South,” Ibeto Cement added.

This war of the cement manufacturers is really about who controls the huge cement market. The Ibeto Cement claims that the Dangote Group controls 83 per cent of the Nigerian cement market, whereas it controls just five per cent.

When will this war end?