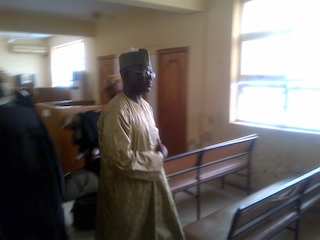 The trial of former officials of the Nigerian Police Pension Fund before an Abuja High Court took a dramatic turn on Monday when one of the accused persons in the N39 billion scam, Mr. John Yakubu Yusufu, who had earlier pleaded not guilty alongside his co accused, changed his earlier stand and pleaded guilty on 3 counts out of the amended 20 counts charge brought against them by the Economic and Financial Crimes Commission, EFCC.

Specifically, Mr. Yusufu pleaded guilty to counts 18, 19 and 20 where he was alleged to have connived with Mr. Essai Dangabar, Atiku Abubakar Kigo, Ahmed Inuwa Wada, Mrs. Veronica Ulonma, Sani Habila Zira, Mrs Uzoma Cyril Attang and Mr. Christian Madubuike, to convert the sums of N24.2 billion, N1.3 billion and N1.7 billion respectively, belonging to the Pension Office to their own use, an offence punishable under section 309 of the Penal Code Act, Cap 532, Laws of the Federal Capital Territory, Abuja, Nigeria 2007.

Other accused persons maintained their earlier plea in the matter insisting that they were not guilty.

The ammended charge introduced two more persons who were not included in the earlier charge. These new accused persons were Mrs. Uzoma Cyril Attang and Mr. Christian Madubuike.

Mrs. Attang who is still in service as Director of Finance and Accounts in the Ministry of Communications had been on a hide and seek game with the Code of Conduct Bureau which had earlier dragged her before the Code of Conduct Tribunal on a 5 count charge of having properties which her salary could not have been enough to acquire.

She was a Director at the Police Pension Office between 2007 and 2008. Within this period, Mrs. Uzoma Attange who worked closely with Yusufu was discovered by the Bureau to have acquired choice properties in Lekki, Victoria Island and Ikoyi all within Lagos metropolis as well as in Abuja. One of her bank accounts which she maintains with a first generation bank, according to the charge slammed against her, had a credit of N500 million Naira, the source of which, she could not explain. The charge was however later withdrawn by the Sam Saba led Code of Conduct Bureau.

Upon Yusuf’s new guilty plea, the prosecution team led by Mr. Rotimi Jacob, a senior advocate of Nigeria, urged the court to convict Mr. Yusufu accordingly. He also brought an application seeking for the forfeiture of 13 properties scattered between Gombe state GRA and Abuja whaich the anti graft agency seized from Yusufu as proceeds of crime.

According to Mr. Jacobs, the process of illegally withdrawing and sharing monies among the accused persons started in 2007 and ended in 2009, within this period, Mr. John Yakubu Yusufu came into office and met this unwholesome practice and continued with it.

He told the court that apart from the 13 properties confiscated from him, that the sum of N325 million found in his account should also be forfeited.

“We urge you to take into account these properties and the money so that the court can make an order for the proceeds from the sales of the properties should go back to the Police Pension Office for the payment of the entitlements of legitimate pensioners” the senior advocate told the court.

Yusufu’s lawyer, Mr. Maiyaki Theodore Bala, in his submission after his client pleaded guilty, told the court that the conduct of his client had demonstrated remorse to the court and to Nigeria as a nation for breaching its laws.

According to him, ” By pleading guilty, the convict has shown respect to this court and have saved precious time of the court. The court will also find that he is a first time offender without any previous record of conviction, furthermore, he is the head of a family of four, a wife and 3 children, two of who are university students while one is a primary school pupil. These people depend on him for their survival and well being, including the payment of school fees. It is also pertinent to note that he has a chronic heart condition which has aggravated to a serious case of high blood pressure, a condition that requires frequent medical attention. His aged parents are still alive and due to old age, have attendant medical complications which require regular medical attention and both depend on him to deal with these”

The lawyer also told the court that Mr. Yusufu had grown to become a community leader with a number of students depending on him for scholarships, these Nigerian children, according to him, will loose the opportunity if justice is not tempered by mercy.

Continuing in his plea for leniency for his client, Maiyaki told the court that going by the application for complete forfeiture of the assets and properties confiscated from his client, that the EFCC had taken everything from his client and he is left with nothing. He urged the court to exercise the discretionary powers granted it under section 309 of the Penal Code in favour of the convict and give him an option of fine so as to serve as incentive to the other accused persons to take the courage of coming forward to admit their guilt where one exists.

In pronouncing Yusufu’s sentence, the court presided by Justice Talba Mohammed noted that the fact that he is a first time offender who he had also saved the time of the court and had forfeited his properties and assets to the Federal Government, that the court is minded to consider the plea for leniency and temper justice with mercy. He however observed that the court also has a duty to Nigeria which have been bedeviled by the monster of white collar frauds which have denied Nigerians of better living conditions.

He further stated that section 309 of the Penal Code under which the accused persons were charged provides for 2 years imprisonment with an option of fine or both. Consequently, he sentenced Yusufu to 2 years imprisonment for each of the counts or N250,000. The jail terms run concurrently.

A displeased Rotimi Jacob protested the option of fine given to the convict and he told the court that the punishment makes mockery of the EFCC’s fight against corruption.

Justice Talba subsequently adjourned trial of the other accused persons to 26th February.

One of the newly added accused persons, Mrs. Uzoma Cyril Attang was not in court but the EFCC applied that her name be temporarily expunged from the charges to enable those in court take their plea. No reason was however given by the anti graft agency why she was not in court.

A private legal practitioner, Mr. Alex Oketa, had dragged the EFCC to court over the seeming preferential treatment being meted out to her as she had been shielded from prosecution even though the agency found her culpable in their investigation of the Police Pension fraud. The case comes up Tuesday before a Federal High Court siting in Abuja.

Mrs. Attang’s inclusion in the newly amended charge filed by the EFCC on 25th January, was calculated to douse that matter.

The Permanent Secretary of the Pension Office, Mr. Atiku Abubakar Kigo, was initially docked alongside Mr. Esai Dangabar, Ahmed Inuwa Wada, John Yakubu Yufufu, Sani Habila Zira and one woman, Mrs. Veronica Ulonma Oyegbula in 2011 on a 16 count charge before the charge was amended to include Mrs. Attang and Mr. Christian Madubike.