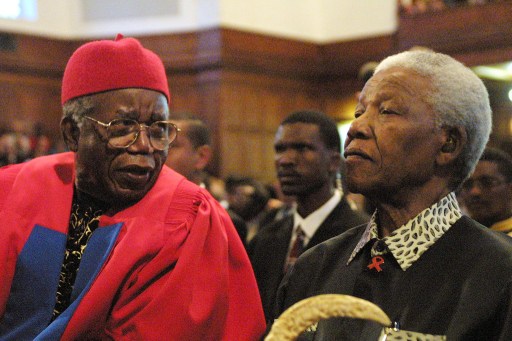 Achebe with Mandela on 12/9/2002 at the University of Cape Town, South Africa. Achebe delivered the 3rd Steve Biko lecture and was also honored with Doctor of Literature

President Goodluck Jonathan said on Friday that late Prof. Chinua Achebe will be greatly missed for his immense patriotism and sincere commitment to a better Nigeria.

“President Jonathan received with immense sadness, news of the passing away of Nigeria’s globally acclaimed `writer, scholar, tutor, cultural icon, nationalist and artist of the very first rank’’, said Reuben Abati, the special Adviser to the president on Media and Publicity.

“The president believes that Prof. Achebe’s frank, truthful and fearless interventions in national affairs will be greatly missed at home in Nigeria While others may have disagreed with his views, most Nigerians never doubted his immense patriotism and sincere commitment to the building of a greater, more united and prosperous nation that all Africans and the entire black race could be proud of.

Jonathan’s tribute was among the torrents of tributes that poured forth globally for the literary icon, who died early Friday in the US at the age of 82.

According to him, Things Fall Apart, Achebe’s international award winning literary work would remain his everlasting legacy to literature.

“The translation of Things Fall Apart into more than 100 languages of the world had put not only Nigeria but also Africa on the map, thanks to Achebe’s literary prowess,’’ Abubakar said.

He recalled how Achebe forcefully rejected and condemned the July 2004 political crisis in Anambra during which thugs attempted to remove a democratically elected governor on the orders of a godfather.

He said the late professor rejected a national honours conferred on him by former President Olusegun Obasanjo and President Goodluck Jonathan administrations based on his convictions and principle.

He said that few Nigerians would have followed the courage of their conviction and rejected national honours because of the fear of losing favour from those in power.

“For Nigerians and Africans we are greatly indebted to him for his great contribution to African Literature.

Also in a tribute, Kenyan Prime Minister Raila Odinga tweeted: “I send my condolences to the people of Nigeria and the family of Chinua Achebe.

“We have lost a great son and the `Father of African Literature’.’’

Governor Adams Oshiomhole of Edo state said Nigeria had lost a literary giant with the death of Achebe.

“On behalf of the people and government of Edo State, I wish to commiserate with the Governor and the good people of Anambra State on the death of the literary giant, Prof. Chinua Achebe,’’ he said.

“With Achebe’s death, Anambra and indeed Nigeria has lost a major personality, who played a unique role in its modern history. Even as an intellectual giant, his voice resonated with clarity and authoritative distinction on matters of national interest.

“He was a remarkable personality, and will always be remembered for his forthrightness and incisive contributions to national issues. He could not be ignored or taken for granted on any matter, even by those who disagreed with him.

“His death evokes nostalgic emotion in the minds of all who read his books. His epic novel, “Things Fall Apart” which earned him the sobriquet, `Father of modern African literature’’’

Omeri said in a statement that the late literary icon was a symbol of Nigeria’s rich human resource from which the whole world benefited.

“The death of Achebe is shocking; to hear that such a man whose wealth of knowledge, experience and insight that would have benefited the nation more at this transformational moment is a great loss,’’ he said.

From Umuahia, Gov. Theodore Orji of Abia state expressed grief over the death of Achebe, and said that he was yet to come to terms with the news of the death.

He described Achebe as a literary icon, a legend of all times and a hero whose novels remained a reference point in and out of the country.

“Achebe made positive impact on humanity through his novels,’’ he said, adding that the late icon would be remembered for standing up for Ndi Igbo at all times in spite of all odds. (NAN)

Political economist, Prof. Pat Utomi said Achebe had earned immortality through his works, but should be further immortalised.

“Achebe’s book, ‘Things Fall Apart’’ is recognized as one of the extraordinary books ever written. Achebe, through his writings, was one of the first to capture the leadership problem with Nigeria and today, it has become prophetic as Nigeria stumbles through leadership issues,” Utomi said.

An Igbo socio-cultural organisation, the Ohaneze Ndigbo, urged the government to name a national monument after Achebe.

“A national monument, preferably a university, should be named after him, so that Nigerian youths will appreciate the value of education,” Ohaneze’s spokesman, Mr Tonnie Oganah, said.

The Lagos State Chapter of the Peoples Democratic Party said Achebe should be given a state burial and a posthumous national award. “His contributions to nation building, education and particularly literature, will remain immortal,” the party’s spokesman, Mr Taoffik Gani, told NAN.

“It is unfortunate that Nigeria has not tapped into his wisdom and knowledge.”

Human rights lawyer, Mr Bamidele Aturu, who described Achebe as a forthright and courageous man, said:“The younger generation has a lot to learn from Achebe’s courage and convictions.

“He was a voice against corruption, mediocrity and ignorance and expresses his opinion no matter whose ox is gored,” he said.

Nigeria’s first female Vice- Chancellor, Prof. Grace Alele-Williams, also described the Late Achebe as a man who loved his country dearly. Until his death, he was serving as a distinguished professor at Brown University, an Ivy League school in Rhode Island, United States.

Alele, a professor of Mathematics, who was Vice-Chancellor of University of Benin, said the late writer would be remembered for putting the name of Nigeria on the map, through his literary works.

According to her, Achebe loved his country and wrote boldly about happenings, not minding whether people liked it or not.

“We were classmates in University College, Ibadan, in 1949; we got our first degree in 1953. It was wonderful to be a classmate of a hardworking man like him, who put Nigeria on the global map.

A former Education Minister, Mrs Chinwe Obaji, told NAN that the late novelist touched so many lives literarily, and was able to shape the minds of Nigerians, both the young and old.

“The death of this great scholar is a blow to the nation and the world at large; we take consolation in the fact that he was able to leave some legacy before his demise.

“He is a Nigerian known all over the world for good, by virtue of his intellect.

Obaji noted that through his literary work, especially `Things Fall Apart’, Achebe foretold happenings in Nigeria, and that many of his projections were manifesting in the country.

The National President , Academic Staff Union of Universities (ASUU), Dr Isa Fagge, also said the demise of the foremost novelist, was “a colossal loss to the academic community’’.

He said Achebe would always be remembered for his contributions to the development of the education sector of the country.

“Here was an icon who had written a lot and achieved many feats, enlightening a lot of people within and outside the country. His demise is indeed a very painful and sad loss to us as academia and as Nigerians; may his great and gentle soul rest in peace,” he prayed.

Prof. Peter Okebukola, former Executive Secretary, National Universities Commission (NUC), described the passage of the literary icon as a huge loss to the nation and the academic world.

“Achebe will be sorely missed by the entire world, because he touched the lives of many literarily. He will remain evergreen in the hearts of old and young alike, for generations yet to come”.

Achebe’s most famous book, “Things Fall Apart”, has been translated into over 50 languages and is rated among the best in the world. Achebe, an indigene of Ogidi, a village in Anambra, was born on Nov.16, 1930.