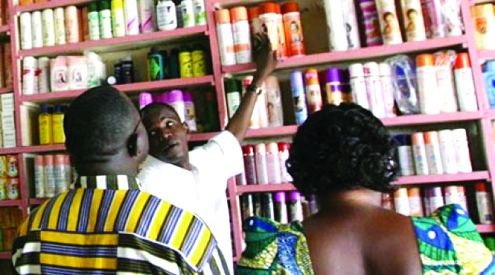 The new Balogun Market located within the Lagos Trade Fair Complex along the Mile 2-Badagry Expressway, is arguably one of the biggest cosmetics products market in Nigeria. The market was built over 13 years ago to relocate traders from the overpopulated Balogun market on Lagos Island. Although traders in the new market also sell other items such as beverages, wines, perfumes, used clothes etc, the market deals mainly in cosmetics products. Various foreign and local brands of cosmetics can be found in the market for wholesale and retail purchase.

P.M.NEWS BusinessWeek visited the market recently and found that lots of fake cosmetics products are  sold along side genuine ones.

Our correspondent observed that most of the fake cosmetics products are popular foreign brands.

According to  findings, most of the fake cosmetic products are mixed with the genuine ones. The faking is usually carried out in neighbouring African countries and sometimes in China and imported into the country through porous borders.

Investigations by our reporter also revealed that the fake cosmetics products are brought into the country and off-loaded mostly in the night by importers who also import genuine goods.

A source in the market said that the reason why importers engage in the act is because  the cost of importation of goods is very high and if they follow due process, the importer will not make any profit. Findings also revealed that not all the fake cosmetics products in the market are imported as some wholesalers only import a particular brand and contract some local cosmetics makers to produce the content for them.

This is the reason why some people will buy a particular cream and discover an entirely different content inside.

To checkmate the incident, The Nigeria’s National Agency for Foods,Drug Administration and Control (NAFDAC) sometime ago swooped on dealers of counterfeit products at the market. The traders lost an estimated half a billion naira ($4 million) worth of goods to the agency when its enforcement team stormed the market unexpectedly.

By the time NAFDAC operatives left the market, a staggering consignment of various unregistered cosmetic products from agents and manufacturers said to be based in China had emerged, forming a large heap. A popular beauty product, Neutrotone Cream (White Moon) made up almost 50 per cent of the total seizure. The original product has a NAFDAC accreditation number while the similarly packaged copy, thought to originate in China, is not registered with the regulatory body.

To beat further raids by NAFDAC and other security agencies, the unrepentant importers now off-load their fake cosmetics containers at night.

Our correspondent also found that the importers also bribe willing security personnel to kept their eyes off their business.

An importer in the market bragged openly to our correspondent: “Once you settle all the security guys, you can off-load any goods here safely and sell it without any  hindrance”

A woman who simply identified herself as Bimpe told our correspondent that it very difficult to tell which product is fake or not as the packaging is almost thesame.

“I have been coming here for a long time to buy cosmetics products.Really there are fake products here and it is difficult to tell which one is fake or not. The packing is almost the same.” sometime if you observe the packs well enough, you could tell the fake of a particular product.  But it doesn’t always work that way because the container maybe the same but the content is fake”

“What I do is to just stay with one importer I know very well that he does not deal in fakes,” she added.

Reacting to the problem, president of the Balogun Business Association, said it is true that there are importers in the market who import fake cosmetic products but that it was wrong to say that the new Balogun Market is filled with fake products.

Ogbonnia said  the criteria which NAFDAC uses to adjudge a product as fake or not is questionable since the agency brands any product not registered with it as fake.

“I cannot categorically say that we don’t bring  unregistered products into the market, but we are making efforts to ensure that our members register any product they bring in, and I’m happy many of them have done that. We still have some small boys who bring in registered products along with unregistered ones but they know they are taking a risk. If they are caught, they face the wrath of the law and we don’t encourage such.

“We are sensitising our people and have been able to transform our business to meet up with the government’s directive. However, those products in question are recognised all over the world but the only problem is that it is not in the record of NAFDAC as registered products.

There’s no fake product in the market as claimed by NAFDAC, rather, maybe it has not been registered. And so we are dealing with different articles of trade or products and there is nowhere you register every product.