'Mogaji Was More Than A Mother-In-Law To Me' 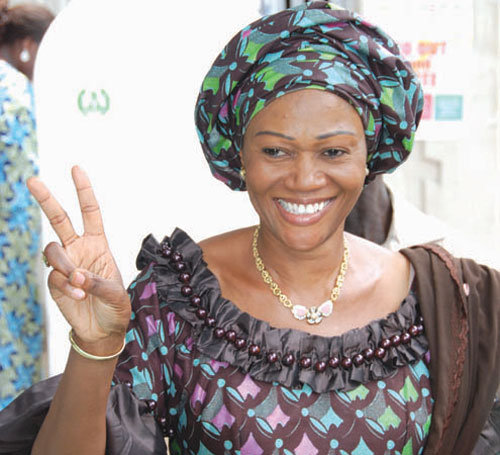 The lawmaker representing Lagos Central Senatorial District, Senator Oluremi Tinubu, has showered encomium on the late President/Iyaloja General, Alhaja Abibat Mogaji, describing her as more than a mother-in-law to her.

The wife of the National Leader of the Action Congress of Nigeria, ACN, Asiwaju Bola Ahmed Tinubu, who said this during the 8th day fidau held in honour of the deceased, added that though Alhaja Mogaji could be difficult, she was happy to have learnt from her.

The fidau which was held at the Tafawa Balewa Square, TBS, Lagos Island, southwest Nigeria, had in attendance eminent Nigerians from all walks of life.

According to Oluremi, “I didn’t see her as a mother-in-law. Any average girl would have thought she was going to be difficult. Though she was difficult but I learnt a whole lot under her and I’m better off for it.

“At the end of the day, I was no longer a wife but a daughter to her. She was like a mother to me. She taught me about good policies and the philosophy of life. We thank God for her life.

“There is not going to be another Alhaja Abibat Mogaji. God never does counterfeit but original. She came through life, she saw life and she conquered,” she said.

She said despite the fact that she was old enough, Mogaji’s death still came as a rude shock to her, adding that she did imbibe everything that could make somebody live longer during her life time.

“She fasted a whole lot to the extent that my husband had to stop her from fasting. She was disciplined in her eating habit. There are so many things that will make somebody to live longer that Mama imbibed.

“Despite the fact that she was old, her death was quite a shock to me. It was as if she would live forever. She lived her life so well. She did everything in moderation and in perfection. She was success personified in every area and when it came to leadership, you couldn’t fault her.

“Among the women folks, she earned her respect. All that we are doing here today is to honour her, she earned it,” she said.

Speaking on what Nigerians should emulate from her, especially the young ones, she said, “Mama was never lettered, she was not educated. All the education that she had was Arabic education, but she lived well. She was hardworking and resilient and these are the things that make people to prosper in life.

“Our younger ones have to imbibe the knowledge and wisdom of enterprise. They have to be creative, respected authority and at the same time, be hardworking and patient.

“They should not look for quick money or quick success. Mama’s success today was a gradual thing. At times, she fail but she kept on. Whenever she failed, she had the opportunity of being corrected and at the end of the day, she perfected it,” she averred.

A member of the House of representatives, Lanre Odubote, described Mogaji as a pro-democracy activist, a national leader, mother of repute and someone whom God created to save her generation.

“Mama was the President General and Iyaloja of all market associations in Nigeria. She was a pro-democracy activist, a national leader and a mother of reputable character. There is words are not enough to describe her. I cannot describe but celebrate her.

“She was very caring. She’s someone God created to save her generation. She assisted a lot of people. The rich, poor, old and the young to organise the market associations posed a big challenge. To organise the women folk into the progressive forces was also a big challenge and all these Mama was able to achieve with ease.

“I know that with a leader like Tinubu who can give us counselling, we would be able to conquer such fear. This is not the time for Mama to die because this a crucial time that we are transitting from military dictatorship to the progressive lineage. Therefore the political landscape would miss her very much,” he said.

The Northern Youth under the umbrella of the Arewa Youth Consultative Forum (AYCF), also commiserated with Asiwaju Bola Ahmed Tinubu over the death of his mother.

The forum’s President, Mallam Shettima Usman Yerima, urged the former Lagos State Governor to take heart, saying, “your consolation must lie in the fact that Mama lived a fulfilled life where she put smiles on the faces of those who came across her or those she came across.”

While congratulating Tinubu on his luck to have the late Magaji as a mother, he reminded him that it is not everybody that can have such a rare luck and grace from God to have such loving woman as mother.