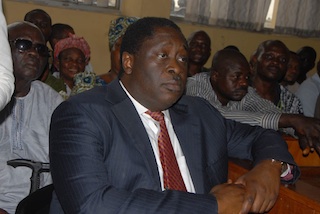 Lawyer to the embattled Chairman of Bi-Courtney Ltd, Wale Babalakin, Dr Abiodun Layonu (SAN) today told a Lagos High Court sitting in Ikeja that his client could not attend his N4.7 billion fraud trial because he has health issue and is in crutches.

They were charged to court by the Economic and Financial Crimes Commission (EFCC) alongside their companies – Stabilini Visioni Ltd., Bi-Courtney Ltd. and Renix Nigeria Ltd.

Layonu  told the court presided over by Justice Adeniyi Onigbanjo today that though his client was within the court premises, he could not come upstairs where the court was located because he was in crutches.

Apologizing for his client’s absence from the dock, Layonu said Babalakin who was within the premises of the court, had a temporary health challenge which was restricting his physical mobility.

“It is extremely painful for him to endeavour to move. At the moment, he is on crutches My Lord,” Layonu said.

The matter was however adjourned till 23 September as Justice Onigbanjo told parties in the matter that the ruling on the applications to quash charges filed by the Chairman of Bi-Courtney Ltd., Wale Babalakin and his co-defendants was not ready.

Onigbanjo said he wanted to deliver the ruling on the applications on the same day and consequently adjourned the matter.