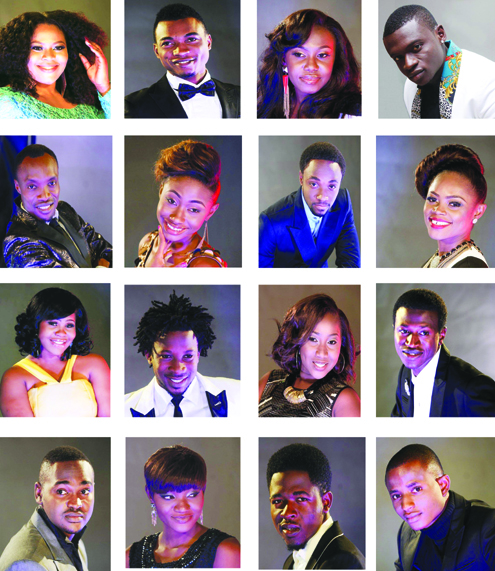 After auditions in 10 cities across West Africa, the MTN sponsored Project Fame West Africa has commenced. The music competition started with an opening gala on Saturday. During the event, the 18 contestants picked from the auditions were reduced to 16. They will now enter the Project Fame Academy to contest. This season’s prizes have been increased.

Here is the brief profile of the contestants battling for this season’s Project Fame, PF prizes:

Olawale Ayodele Ojo is a 400-level Agronomy Student of Ladoke Akintola University, Oyo State, Nigeria. He is fondly referred to by friends as ‘Pimp’ because of his amazing skill in laptop and phone repairs.

Jimoh Lucky, who enjoys music by a lot of Nigerian acts like 2Face, Wande Coal and Banky W, is a native of Edo State. He loves hanging out with his friends at Waterboard neighbourhood in Auchi, where he lives and enjoys the company of Jovita Ekponbor, his girlfriend. Jimoh is 23 years old, and ultimately wishes to make it to the top six in the competition.

Oluchi Israel is a 19-year old University of Calabar student, whose aim of joining the competition is to increase her vocal abilities, take on higher notes and ultimately be a music star. She does not see romance in the Academy as a possibility because of her undying commitment to Emeka, her boyfriend whom she holds very dear.

Leonard Massaquoi has a son named Majesty. Leo speaks fluent English, having started his education at the Services Children School, Wilberforce, Sierra Leone under the tutelage of Mr. Kamghou. His love for basketball can’t be over emphasised as this serves as extra activity for him. He plays basketball for his team, Bellair Eagles, as a point and shooting guard.

Roland Ricketts is a Microbiologist. He loves music and sees the PF Academy as the best music school in West Africa. Last year, he made it to the opening gala but narrowly missed out. He is a gentleman, fluent in English and Yoruba languages. He lives in Abuja with his family. He is a graduate of Leads City University.

David Crentsil is a 22-year old final year Elect-Elect Engineering student of Regional Maritime University, Accra, Ghana. He loves singing and has tested his skill with some of the best hands in Ghana. He recently came 6th in the 5th season of Ghana’s Stars Of The Future music competition. He is the only child of his parents and was brought up by his grand-mother.

Henry McJohn is a native to Delta State, Nigeria, but has lived a better part of his life in Lagos State. He loves music and has been a back-up singer for the likes of Ben Okri, Stella Monye, Blackky and many others.

He is 28-years old and has an eclectic taste for music. He has gone through the PF audition process 6 times. Last year, after trying the Wild Card option, he made it to the top two, but lost out at the final hurdle. This year, he believes he is ready to make it to the top and plans to use the platform as a spring board.

Immaculate Patience is a 22-year old girl from Benue State, Nigeria. Her hobbies over the years remain singing, swimming and dancing. Immaculate is a Mass Communication graduate of Benue State University.

Niniola Apata is a graduate of the University of Lagos. She is 28 years old and loves to sing with her young son. She expects to enjoy her stay in the PF Academy and also get to the top with her music, riding on the popularity and exposure the competition will give her.

Johnny Drille Ighodaro lives in Benin City, schooled at the University of Benin and auditioned in Benin City, Nigeria. Johnny is 23 years of age, the first son of a School Principal and clergy man.

He spends time in his music studio. He plays the guitar and is ready to do his best in the competition.

Omolayo Peter is a Food Engineering graduate. Aside singing, he enjoys knitting, cooking and ballet dancing.

She auditioned for PF in Ibadan, but lives in Lagos with her family where she works as a model. She is also a student of the University of Lagos.

This last child among seven siblings surely knows how to be on top of her groove as she wants to be known by her fashion statement and huge hairstyles.

Janet Ayoka:  The pleasant 23-year old Ayoka is set to give her best this season. This graduate of Mass Communication, who enjoys singing and sleeping, hates intimidation and fake people. She had tried to get on the show three times before. Now she is ready to go far this season. Her resolve is to enjoy the academy and improve on her human relations.

Simon Ekechukwu is cool and calm. He is an Economics graduate of Imo State University and enjoys playing the guitar. Simon is expressive and enjoys writing, listening to music and of course singing.

Blessing Kakogbe is a happily married 29-year old Edo lady who lives in Abuja with her husband. She is a Sociology graduate of University of Abuja. Living in a quiet urban area in Abuja, Blessing listens to music icons such as Beyonce, Rihanna, Leona Lewis on the international scene while Omawumi is her choice in Nigeria.

Margaret Cephas has been singing since she was a child. She is Liberian and came second at the 2012 edition of the Liberian Talent hunt -A Star Is Born. She is currently a year four Biology/Chemistry student of United Methodist University, Monrovia, and looks forward to making friends in the academy.