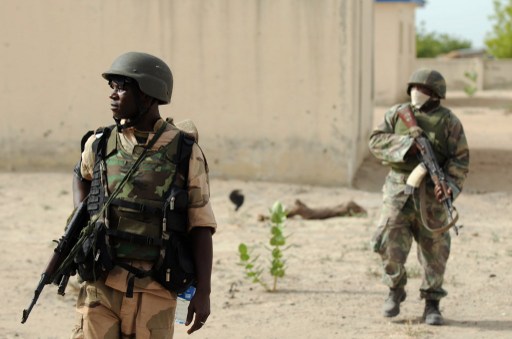 2 soldiers at Boko Haram front: not anywhere in sight in Chibok

It was the second such attack this month, officials said on Friday.

“Boko Haram people attacked the village on the ground that they have refused to cooperate with them, that they refused their message,” defence spokesman Brigadier General Chris Olukolade told AFP of the incident in Dumba, referring to Islamist extremist group Boko Haram.

“The report that was presented has it that 35 people were killed and 14 wounded.”

The attack occurred on Monday, but the information did not become public until Friday with phone lines cut in the region and the village located in a remote area.

A separate military source speaking on condition of anonymity said Boko Haram gunmen dressed as soldiers entered the village early Monday and took up positions at a crossroads, where they fired upon worshippers leaving a mosque after morning prayers.

The source said the attack was believed to be in reprisal for a raid by soldiers and vigilantes in the village the previous week that resulted in the arrest of Boko Haram members.

Separately earlier this month on August 10 and 11, suspected Boko Haram members stormed a mosque in Konduga and shot dead 44 worshippers as well as 12 other people in a nearby village in another area of the northeast.

Those attacks were believed to be revenge over citizen vigilante groups forming to help the military battle Boko Haram, which has been waging an insurgency since 2009.

Nigeria’s military launched an offensive in the northeast in May aiming to end Boko Haram’s insurgency.

The pattern of attacks that has occurred since then indicates the insurgents may have to a large degree scattered into more remote areas of the region. Dumba is located near Lake Chad and close to Nigeria’s borders with Cameroon, Chad and Niger.

It is near the town of Baga, where in April the military faced accusations of major abuses after nearly 200 people were left dead, with residents alleging soldiers shot civilians and set fire to much of the community.

Also on Monday, Nigeria’s military claimed that Boko Haram chief Abubakar Shekau “may have died” from a gunshot wound following a clash with soldiers on June 30.

However, there has been no confirmation and violence has continued.

Boko Haram’s insurgency has left more than 12,000 people dead since 2012, including killings by the security forces, who have been accused of major abuses.

The new statistics was compiled by the United States Commission for International Religious Freedom, a non-partisan federal group.

The group Tuesday released a summary on sectarian violence in Northern Nigeria at the hands of the Boko Haram.

The summary report dates back to the start of 2012, and claims that the largely anti-Christian violence has killed about 12,000 people. But more tellingly, it also outlines attacks against Muslim leaders and critics, as well as state and private institutions.

The USCIFR gathered the information from multiple sources, and said it only included the attacks claimed by the Boko Haram, so the impact, they added, could be even greater. The statistics are broken down into four sections. The first one summarizes some of the 50 attacks on Christian Churches. The report stated the Boko Haram will usually attack during services to maximize casualties. Read the report here:Final Nigeria Factsheet August 19,2013(3)

The second section details attacks on Christians in the past 19 months, including a bomb attack Kano state on July 30, one of the deadliest with at least 45 deaths.

The third section also lists attacks on Muslim clerics and critics who have denounced the group. Lastly, the fourth section lists attacks on places and groups that the Boko Haram considers to be un-Islamic. They include attacks on people at bars or playing cards, as well as the November slaying of 20 women for wearing mini-skirts.