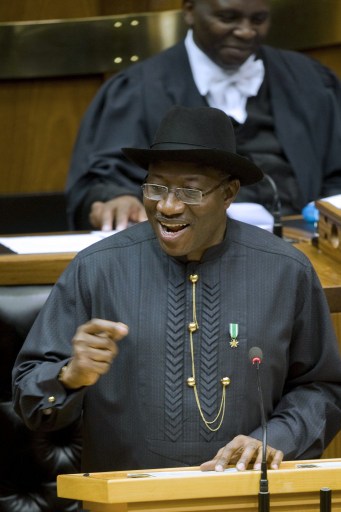 President Goodluck Jonathan on Friday in Nairobi lent his voice to the ongoing debate on whether President Uhuru Kenyatta of Kenya should be tried by the International Criminal Court (ICC) at the Hague.

Delivering an address to the Joint session of the Kenyan Parliament on the sidelines of his state visit to that country, Jonathan stressed that International Organisations were created to resolve problems and not to compound them.

He said International Organisations should be seen as agents for the resoluttion of crisis in countries across the world and should not be seen as contributing to problems of nations.

Specifically, Jonathan said that the insistence on trial of Kenyatta by the ICC would further compound the political crisis which had already been doused in Kenya, recalling the general elections in Kenya in 2006, which plunged the country into political turmoil.


Jonathan noted that with the successful completion of the recent peaceful Presidential elections in Kenya, the ICC should not be seen as a body to derail the progress made in the country.

“I belief that any law whether local or international as well as Treaties and Conventions should be instruments for the resolution human problems and not to compound them,’’ he said.

He called on the international community to support Kenya in its social-economic development.

The trial of Kenyatta and his Deputy, William Ruto, over alleged crimes against humanity committed before their elections had generated controversies in that country.Members of the Kenyan Parliament were recalled on Thursday from recess to vote for the withdrawal of the country from the ICC.

The lawmakers who successfully voted in favour of the motion, had contended that they were taking the steps in defence of Kenya sovereignty.

However, the global court has insisted that the trial of Kenyatta and his Deputy Ruto would go ahead.

In a contrary opinion, Jonathan argued that the 2013 Presidential elections which brought President Kenyatta to office had demonstrated that Kenyans were capable of resolving their problems without interference from the international community.

“I believe and I share the sentiments of the government and people of Kenya when I say that we in Nigeria do not embrace democracy and the rule of law in response to external pressure or demand.

“We have embraced democracy and its underpinnings such as free, fair, credible and transparent election; rule of law; respect for human and peoples’ rights,because they are the right things to do and they are good for us.

“We do not seek the validation or endorsement of our democracy outside the collective will of our people, the citizens and electorates of our respective countries.

“Democracy is not a one-size-fits-all system; rather it is a dynamic political system which must be operated within the particular context it finds itself,’’ he said.

President Jonathan also called for the reform of the UN Security Council and other multilateral Organisations with lopsided membership.

“The on-going debate about the emerging global governance architecture should be of interest to our two countries and Africa as a whole.The existing international system is undemocratic and unfair,” the president said.

“Africa’s non-representation in the Councils and Chambers of international decision-making in the past was always explained in terms of our lack of sovereign independence.

“Africa and other regions of the world, either not represented at all or inadequately represented, should be admitted into the permanent membership category of an expanded UN Security Council.

“Similar expansion and reform should also apply to all the other multilateral institutions with lopsided membership such as the Bretton Woods institutions.

“This would ensure that the decisions of these organisations enjoy the respect and credibility of their members,’’ he said.
Read the full address here:PRESIDENT’S ADDRESS TO THE KENYAN PARLIAMENT ON THE OCCASION OF STATE VISIT TO KENYA

Speaker of the Kenya National Assembly, Hon. Justin Muturi acknowledged President Jonathan’s support for the Kenyan position that its people should be allowed to solve their problems.

He noted that the decision on the position of the ICC could plunge Kenya back into the unfortunate incidents of 2007.