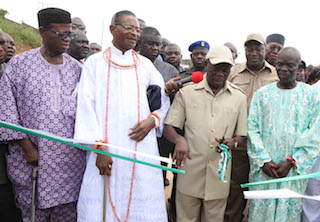 Governor Adams Oshiomhole of the southern Nigerian state of Edo has commissioned four roads completed by his administration in the first year of his second term.

The commissioning was part of activities to celebrate his fifth anniversary as Governor of the state.


The Governor said “during my campaign, I said we would deal with the flooding problem on a holistic basis. We would carry out studies on the basis of fact and studies; we will construct and build roads.

“These roads are part of sixteen other roads which we loosely refer to as Airport roads but it includes several roads and several drainages. So for those who do not know, we have built a number of roads in our second term.

“Let me assure you that the only way to ensure that the Edo project continues is to listen to words of wisdom. Everybody in the APC family, we all understood that our defence line is with the people.

Oshiomhole said “let me assure the people of the state that we must continue to do even more even in the face of dwindling resources in order to strengthen the partnership the great people of this state and this government and indeed future government to be formed by APC long after my departure from government.

“We have already decided and I have the legislative backing of the House of Assembly that all the streets that make up Airport Road, all of them will be lit. They are going to have streetlights. Because I believe when we have streetlights on every road we have built and we have drainages, walkways on the roads, every part of the state will become a place where people can move freely, feeling secured”, he said.

Oshiomhole said that all the roads that are being built in Benin City are sufficiently solid adding that the side drains flow to the river or to the moat.

In his remark the Esogban of Benin Kingdom, Chief David Edebiri said today is special day in Benin and for many people who reside in the communities.

He said no other party will take the government of Edo State adding what the governor has done will speak for him.
“This road project which has defied solution for over ten years but has now been completed is a testimony,” he said.

In a welcome address the Commissioner for Environment and Public Utilities, Prince Clem Agba said “we are here to flag off the commissioning of Associated roads on the Airport Road project.

“These roads are part of the water storm project of Edo State government aimed at controlling the erosion situation in the area around the Airport and Ogba road axis.

The roads according to him are built with side drains and walkways with the drainage occupying an expanse of 2km and 5ft deep draining erosion to Ogba river.