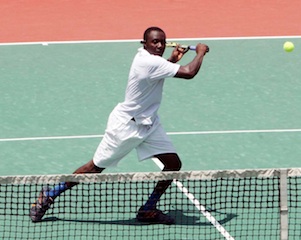 An elated Samuel told P.M.NEWS Sports after the match that she played against a very tough opponent and would have lost if not for the extra effort she put in.

“I did not expect the kind of opposition I met in Sarah. She gave me a tough time, I would have lost this match if not for the extra effort I put in,” she said.

In the semi final of the men’s singles, Shehu Lawal was declared the winner as his opponent Abdulmumuni Babalola retired when the game was 1-4 due to a leg injury.

Lawal will now face Clifford Enosoregbe in tomorrow’s epic final in what could be described as a repeat of the semi final of this year’s CBN Open which Enosoregbe won.

The Edo State-born player picked the final ticket of the Dala Hard Court after he saw off Henry Atseye in two straight sets of 6-3,7-5 in Friday’s semi final tie

Enosoregbe said he is looking forward to winning the encounter,even as he prayed for an injury free match on Saturday.

“I want to win this time around and I hope that injury does not stop me,” he said.

Meanwhile, the pair of Samuel Omoile and Nonso Madueke defeated Abdulmumuni Babalola and Taiwo Owolabi, 6-4,7-5 to win the Men’s Doubles of the championship.