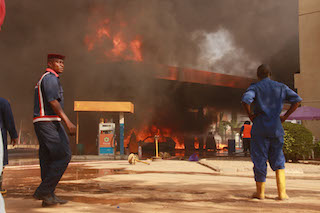 An explosion which could be heard many kilometers away resulted in uncontrolled panic in Nigeria’s Federal Capital Territory on Thursday as residents thought the blast was from a bomb detonated by members of Boko Haram insurgent group.

However, the blast was from a tanker which caught fire as it was discharging petrol at the Conoil fuel station opposite the headquarters of Nigeria National Petrol Corporation in the Central Business Area of Abuja.

The explosion shook buildings several kilometers away and resulted in huge fire ball that can be seen around Abuja. NNPC immediately asked its workers to evacuate their offices. The explosion shattered glasses at nearby Millennium Builders’ Plaza. It was learnt that one person was injured by the splinter from the glasses at the Plaza. Workers in other offices around the petrol station also ran out of their premises while others immediately moved their vehicles away. However men from the federal fire service deployed several trucks to put out the fire and control it from spreading to nearby Total Filling Station.

Firemen were still battling to control the fire as at the time of filing in this story. Though the main building of the filling station has not been affected by the fire, the raging inferno has however consumed some of the dispensing pumps and cars probably left behind by fleeing customers. Police officers and well armed soldiers as well as officials of National Emergency Agency were also deployed to prevent rowdiness at the scene of the incident.

A source at the filling station told PM NEWS that the hose through which petrol was being discharged into the underground tank in the station caught fire few minutes after the discharge began. Though he said the development was a regular occurrence, he added that efforts to put out the fire this time around, he said, were frustrated by the unexpected fast spread of the inferno.

The source said there have been at least four of such incidents in the petrol station in the past few years, but the workers of the filling station were able to control the fire. One of the incidents was recorded this year. According to him, on noticing the fire, the men supervising the discharge of the tank had immediately went to bring the fire extinguisher to put it out, but before they could get back, the inferno has already snowballed to where the flow of the fuel is supposed to be turned off in the tanker and everybody in the station ran away as the fire grew. This aside, he said if the driver of the tanker had immediately enter to drive the vehicle away the spread of the fire would have been controlled. He also said though NNPC has been assisting the petrol station to put out such fires in the past, this time around, the company deployed a small fire truck which was ineffective in putting out the raging inferno. Though he said there was no casualty, PM NEWS however gathered one person was injured and has been taken for treatment.