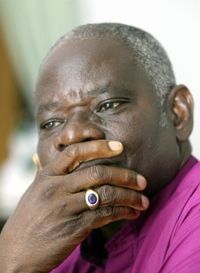 The retired Primate of the Anglican Church of Nigeria, Peter Akinola, along with his driver, was Tuesday evening kidnapped by gunmen.

He was abducted at the entrance of his Peter Akinola Foundation Centre for Youth Industrial Training at kilometer 10, Abeokuta-Lagos expressway at about 3p.m

Akinola was also a former President of the Christian Association of Nigeria (CAN).

The retired Primate who has always expressed concern about the increasing youth unemployment in the country, on retirement set up the Centre,which is aimed at training unemployed youths to acquire skills in various vocations free of charge.

A source close to retired primate confirmed to our correspondent that he was leaving his youth Training centre where he had gone to inspect some on-going projects when the gunmen blocked
his vehicle and started shooting into the air to scare people away.

He was asked to alight from the car by the kidnappers. “ The driver wanted to resist the kidnappers but the primate cautioned him. The primate was then ordered to join their car,” a witness said. His own car was also driven away.

The police have begun to investigate the kidnap and Ogun State governor, Ibikunle Amosun has already been alerted of the situation.

“The governor has already visited the foundation to learn more of his kidnap and the police are already investigating his kidnap,”P.M.News was told by a source close to the Primate.

“We should be praying for his safety. I pray that he is released as soon as possible and I know that God will deliver him,” the source added.

Akinola retired from his position as the Primate of Church of Nigeria in 2010. He was also the former Bishop of Abuja and Archbishop of Province III, which covered the northern and central parts of the country.

Peter Akinola Foundation, which he founded and which got a donation of N200 million from Theophilus Danjuma Foundation recently has already graduated over 80 students in two academic sessions.

Located in the outskirt of Ota, Ogun State, the foundation is a vocational training centre designed to help youths find their path in life.

PAF, as a non-profit-making organisation is designed to help the youths to be economically independent.

The foundation also intends to rescue the youths from the stranglehold of ‘Satan’ by bringing them to the knowledge of God and to encourage the Church to stand for the edification of people’s spiritual wellbeing.
The four main objectives of the foundation is to reduce unemployment, teach Christ’s genuine doctrine, envangelise the word and ensure self reliance.

Ogun State Police spokesman,DSP Muyiwa Adejobi said the Police have set their dragnet round the State.

According to him,”we are aware of the incident but it is too early to jump into conclusion that it is kidnapping.We were told that some armed men waylaid him and went away with his vehicle,but we have seen cases where armed men will steal a vehicle and go away with its owner or occupant for their own safety.

“Therefore,it is too early to draw the line that it is kidnapping.However,we have alerted our men. We have details of the vehicle,by God’s grace,it won’t be a sad situation.The Primate will be safe,the Commissioner of Police and the Area Commander are out to make sure he is safe”,Adejobi said.

Peter Akinola was the second Anglican church clergy to be kidnapped in recent months. In September,gunmen in Rivers State abducted Anglican Archbishop Ignatius C.O Kattey, who is also the Dean of the Anglican Communion in Nigeria. He was kidnapped with his wife, Beatrice in Port-Harcourt.

The wife was the first to be released same day, but it took eight days before the abductors freed Kattey.