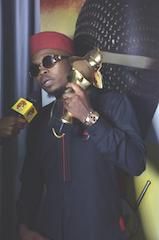 The event which can truly be described as the biggest awards of 2013, had A-list artistes go head to head to win bragging rights for the next one year in their different music categories. But Olamide shone brightly.

The 24-year old rapper bagged the ‘Best Street-Hop Artiste’ with “Durosoke”, ‘Best Rap Album’ and ‘Album Of The Year’ both for his sophomore YBNL album.

Olamide also won alongside another new sensation Phyno in the ‘Best Collabo’ categories with the hit track “Ghost Mode”.

Phyno who is yet to drop his debut also won the Headies’ ‘Best Rap Single’ for his hit track “Man of the Year”.

This year’s award ceremony hosted by the duo of Mavin Records’ Dr Sid and Tiwa Savage, saw the tightest competition with a selection of some of the hottest names in the Nigerian music scene.


Fast rising Afro pop artiste, Sean Tizzle won the Next rated awards with his increasingly popular song “Sho Lee”. He dusted the likes of Burna Boy, Dammy Krane, Seyi Shay and Phyno to win the keys to a Hyundai Tucson SUV that is attached to the award.

Jaywon’s “This Year” was adjudged the “Best Recording Of The Year”. Iyanya emerged the Artiste Of The Year, just as KCee’ Limpopo emerged as the Song Of The Year.

But the highlight of the night was the induction of legendary Fuji musician, King Wasiu Ayinde Marshal into The Headies’ Hall of Fame.

The Fuji music czar who thanked the organisers of the award for the honour later closed the show with a five-star performance.