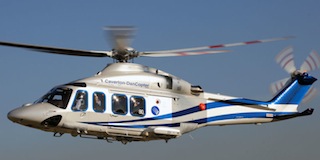 Surendra Bhagwandass, an expatriate and a manager at Caverton Helicopters, a company that has contracts spanning from SHELL to TOTAL, has resigned over the unfair treatment of Nigerian workers, he said in an email.

Bhagwandass, a Base Maintenance Manager at Caverton Helicopters in Lagos, southwestern Nigeria, said he became frustrated that while he was being well taken care of, Nigerian workers were poorly paid and their salaries were sometimes delayed.

He said it was a security breach not to pay people who work for oil companies.

“Shame on you guys,” he told Caverton management in an email distributed to most staff and obtained by our correspondent.

“(I) heard from the people I work with that they are not paid for the festive season.

“This is a security breach as I now feel uncomfortable to travel and work with, while you guys have a merry time.

“Please have a heart as these people have family while you all enjoy the best. Being with your family and Happy.

“You all break record as the only Company in the World not to pay your workers.

“Shame on you guys,” the expatriate said.

But Doyin Alegbe, a Personal Assistant to Caverton Managing Director, Mr. Shola Falola, dismissed the letter saying that it was “a gross case of insubordination”

She said because expatriate workers are paid in dollars and Nigerian staff are paid in naira, the company had challenges selling the dollars and this caused some delay in December.

She said everyone has now been paid.

She said Caverton does not discriminate between Nigerians and expatriate workers.

Among the allegations, the staff said there was no salary structure and promotion was almost non existent for Nigerian workers.

The staff said while local workers are not given accommodation or security escorts, expatriates enjoy all the benefits but come to work late and leave before them.

“They earn dollars, we earn naira but we work more than them. Several staff have been attacked because you need to leave your house around 4 o’clock in the morning. There is no security for us. But they enjoy everything in our country,” a staff said, pleading anonymity.

The staff accused Caverton of promising oil companies such as SHELL that it will take good care of staff, but not doing so once the contract is signed.

“We signed a contract with SHELL for N94 billion,” he said, adding that the money doesn’t trickle down to Nigerian staff.