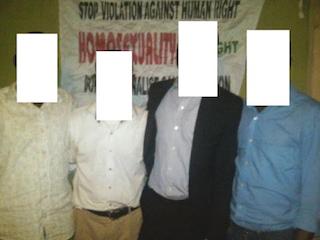 Nigerian gays and lesbians, under the aegis of ‘The Right Defense’, are daring President Goodluck Jonathan, and would soon stage a demonstration in Abuja, the Nigerian capital, they said in a statement on Saturday.

They are protesting against the anti-gay law which took effect on 7 January this year when the president signed it.

Although overwhelmingly supported by Nigerians, the law has been sharply criticised by western countries, especially the United States and Britain, which see it as an infringement on the rights of gays and lesbians.

Nigerian gays in a statement they accompanied with masked pictures of themselves said they were protesting against an “undemocratic and unlawful discrimination” of gays and lesbians and trans-genders in the country.

The demonstration in Abuja, they said, has become necessary to condemn what they call “an increase in threats against fundamental human rights of certain persons including LGBT in the country.”

“This is not an ideological protest movement. It’s about quality of democracy in Nigeria. This is about people making some very democratic demands about the government’s need to respect freedom of assembly and freedom of association, as it is channelled in the United Nations universal declaration of Human Rights,” The Right Defense said.

The group added: “We also challenge the existence of the Nigeria human rights body, the National Human Right Commission for its lack of integrity and principle in the fight against discrimination and violation of individual rights.”

The Right Defense said many of its members have suffered overt discrimination from law enforcement and judicial authorities, particularly in their various communities for being constantly accused of indecent practices.

They said they often don’t report rights violations to authorities out of fear of reprisal or arrest.

The group said many Nigerians have in the past fled the country due to threats to life and harassment in their communities.

“The planning for the unviolent rally is to avert the continuous attacking of the unarmed citizens and the unlawful and arbitrary arrest of wanted individuals,” the group said.

The individuals declared wanted by the police, the group said, include, Lizzy betty, Precious Rita, Orilonise Hakeem I, Aniere Olaniran A., Egwabor Felix, Samuel Adekunle Segun, Michael Olanrewaju O., Olorunmaku Taofeek and so many at large.

In the statement, the Right Defense Group it commends European Union Countries and the Canadian Government through its representatives for standing for urging the Nigerian government and the National Assembly to reverse the prohibited same sex law.