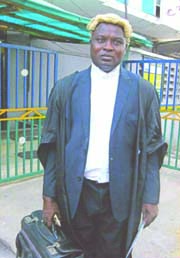 P.M.NEWS gathered that the suspect was nabbed by a police orderly attached to the Appeal Court, DCR Office, Lagos who suspected him.

Following his arrest, the state branch chairman of Nigerian Bar Association, NBA, Mr. Alex Morka, was contacted about the development and he instructed the police orderly to take the suspect to the nearest police station.

The suspect was handed over to the police at Lion Building for interrogation. During interrogation, according to the police, the suspect, a resident of 34, Nathaniel Osagie Avenue, Ikorodu Road, Owode Onirin, Lagos, allegedly confessed that he was a fake lawyer.

In his alleged confessional statement to the police, the suspect allegedly said: “I have been practicing as a lawyer since 2011 and I have represented clients at the magistrate, high court and Federal high courts without any problem.

“But I have never attended law school or any institution to read law in my life but I was called to the bar through a source at a high court in 2011. I bought the gown and wig in the open market and wore it and started practicing as a lawyer. I did not know that it is an offence to practice as a lawyer without authority. I promise to change if I am set free.”

After investigation by Corporal Victor Afu and his team, the suspect was charged before a Tinubu Magistrates’ Court, Lagos on a three-count charge of impersonation and unlawful possession of law wig and gown.

The offence the accused committed, according to Inspector Chidi Okoye, are punishable under section 378(1), 78(b) and 327 of the Criminal Laws of Lagos State, 2011.

The accused pleaded not guilty to the crime and Chief Magistrate Miss A. O. Awogboro admitted him on bail in the sum of N500,000 with two sureties in like sum who must be blood relation and reside within the jurisdiction of the court.

She adjourned the matter till 3 March, 2014 for mention. The suspect was moved to Ikoyi Prison pending when he will fulfill the bail conditions.