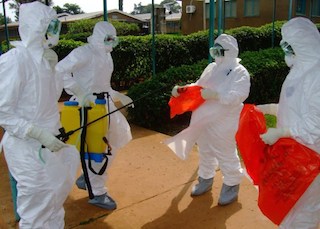 Kenya on Saturday became the latest country to ban travellers from parts of Ebola-hit west Africa as Nigeria scrambled to stop the the deadly disease spreading through the continent’s most populous nation.

Health Minister James Macharia said Kenya is closing its borders to travellers from Guinea, Liberia and Sierra Leone — the countries most affected by the worst-ever Ebola outbreak.

National carrier Kenya Airways also said it would suspend its flights to Freetown and Monrovia when the ban takes effect on Wednesday.

The move comes amid an international appeal to help contain the deadly virus, which has already killed 1,145 people across west Africa this year.

Nigeria on Saturday said it has trained 800 volunteers to help in the fight against Ebola as the country’s already weak healthcare system struggles to cope with the outbreak.

Authorities in megacity Lagos, where four people have died from the virus, last week appealed for volunteers to make up for a shortage of medical personnel because of a six-week doctors’ strike over pay.

“We have trained some 800 volunteers in the area of contact tracing, sensitisation and treatment of the Ebola disease,” he added.

Experts say Ebola is raging out of control in the region, with the World Health Organization declaring the epidemic an international health emergency and appealing for global aid.

The disease erupted in the forested zone straddling the borders of Guinea, Sierra Leone and Liberia earlier this year and spread to Nigeria last month.

The districts of Kailahun and Kenema in eastern Sierra Leone have become the new epicentres of the outbreak, with charities and health authorities battling to keep it from spreading.

“You cannot mess about here: this virus will kill you. One mistake, one wrong move, and you’re dead — that’s it,” a senior aid worker in Kailahun told AFP.

But officials fear an outbreak in the key regional hub of Nigeria could be far more dangerous, and US health authorities pledged this month to send extra personnel and resources.

Volunteers have so far been deployed to 57 districts of Lagos state but more are needed, particularly to treat those already infected with the disease, Bello said.

Lagos’ state government has stepped up a media campaign to raise awareness of how to prevent the spread of the disease, including radio and television advertisements and public health announcements.

Nigerian doctors have been on a nationwide strike since July 1 to demand a pay rise and better working conditions.

Medical charity Doctors Without Borders, known by its French acronym MSF, on Friday warned Ebola is spreading faster than authorities can handle and could take six months to bring under control.

Draconian travel restrictions have been imposed across west Africa and several airlines have cancelled flights to affected countries in a bid to stop it spreading beyond the region.

Scottish health officials on Saturday confirmed that a woman, reportedly from Sierra Leone, who fell ill at a deportation facility south of Glasgow has tested negative for the virus.

Nigeria has also withdrawn its athletes from the Youth Olympics in the Chinese city of Nanjing as a result of the outbreak, state media reported as the games opened on Saturday.

Ebola is spread by contact with an infected person’s bodily fluids, such as sweat and blood, and no cure or vaccine is currently available.

The last days of a victim’s life can be grim, characterised by agonising muscular pain, vomiting, diarrhoea and catastrophic haemorrhaging described as “bleeding out”, as vital organs break down.

Canada and the United States are both sending consignments of largely untested drugs in the hope of saving hundreds of lives, but officials warn they are likely to have little impact.