Show You The Money — Wizkid 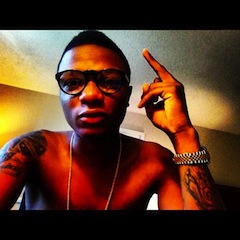 On the verge of international breakthrough since his much publicised collaboration with Chris Brown, Wizkid apparently has gained so much steam when it comes to making music. He has kept the airwaves busy with his kind of music and this new joint (SHOW YOU THE MONEY) is quite different and a pretty good song.

The video, Show You The Money, is a very different kind of video expected from Wizkid. One thing I’m particularly happy to see in such a hit is the very cordial and happy relationship which Wizzy had with the street. Virtually everybody on set had a second or two of fame. But is Banky W ‘famzin’ Wizzy now?

Obviously the director just set out to have fun as there was little creativity and minimal of costumes (just three shirts of almost same design) for the main act as most videos always show costume changes.

Since very little attention was paid to creativity, the director tried to balance that with technical attention. Despite filming in broad day light, he tried as much as possible to avoid over exposed shot. There is a cameo appearance by MTV vj Ehiz and super producer Dokta Frabz.

DIRECTOR:
PATRICK ELIS
If I don’t know any other thing about this fine director, I know for sure that he’s an hardworking lad who puts energy and soul into any thing he’s working on. One of the leading figures in the Nigerian music video production industry, Patrick, unarguably is here to stay.

VERDICT:
Though a video that lacks a sense of direction, low creativity and could have been achieved with next to no technical know how, it remains a video you might want to see time and over again as there’s always something to smile about. The baby dancers did well and the ‘agberos’ added a street appeal that made the video seem cool.