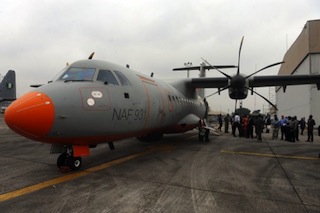 Nigeria’s military on Tuesday took the wraps off a new aircraft to tackle high-seas pirates off the country’s coast, as well as maritime hijackers and oil thieves.

The high-tech plane is one of seven to be operated by the state-run Nigerian Maritime Administration and Safety Agency (NIMASA) and the Nigerian Air Force.

“When fully operational, no vessel can escape our coverage,” he told reporters before a demonstration flight from Lagos to Escravos in the Niger Delta and over offshore platforms in the oil-producing southeast.

The 20-seat plane can fly as low as 200 feet (60 metres) above the sea and passes on information about maritime traffic to the navy, who can intervene with fast-attack craft if necessary, he added.

“Our aim is to fight all manner of maritime crimes in the country. With this aircraft, we can spot any vessel hundreds of kilometres (miles) away,” said Air Group Captain Enobong Eneh Effiom.

The aircraft is inscribed with the words: “Vigilance over the ocean.”

Piracy off the western coast of Africa has been rising in recent years, with attackers targeting ships playing a key role in the region’s thriving oil industry.