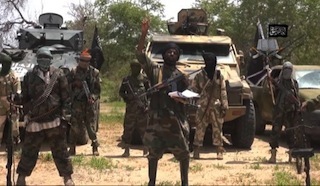 Boko Haram has seized control of a town in northeastern Nigeria, the latest to fall into Islamist hands in the crisis-hit region, witnesses and a local official said Thursday.

Several residents who fled the Boko Haram assault on Buni Yadi in Yobe state said it began late last month, with the insurgents ultimately taking over the main government building.

They have reportedly raised their flag above the building and have carried out summary executions, including of two people who were caught smoking cigarettes.

Abdullahi Bego, the spokesman for Yobe’s Governor Ibrahim Geidam, could not confirm the executions.

But he told AFP: “As I speak there are no military in Buni Yadi and locals say that Boko Haram come and go as they please.

“So many people from Buni Yadi have fled to the state capital Damaturu,” he added.

Residents said the rebels, who massacred dozens of students at a boarding school in Buni Yadi in February and kidnapped more than 200 schoolgirls from neighbouring Borno state in April, had set up roadblocks.

They were also robbing people as they tried to flee.

“I left Buni Yadi yesterday (Wednesday) because it was no longer safe for me and my family,” said trader Surajo Muhammad.

The gunmen “shot dead two men for smoking and they also killed a known drug peddler”, he added.

“I couldn’t stay any longer because I came to realise these people have come to stay,” he said.

“I thought they would be there for a few days but from our understanding they have turned the town into their (territory).”

The United Nations has confirmed that Boko Haram had seized control of the towns of Damboa and Gwoza in Borno state in recent weeks.

There are indications that Damboa was retaken by the military in an offensive earlier this month but details are not clear.