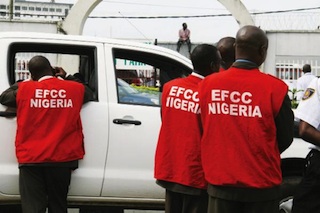 Nigeria’s Economic and Financial Crimes Commission is on the trail of a group of computer hackers, who had stolen N6.28billion, about $40million, from a Nigerian bank.

At the head of the IT thieves is Godswill Oyegwa Uyoyou, who worked in the Information and Communication Technology (ICT) department of the unidentified bank.

He is now on the run, according to a report in a weekly newspaper. Uyoyou allegedly conspired with others and hacked into the bank’s computers, disbursing the funds to various accounts as they pleased. Uyoyou, who hails from Isoko South Local Government Area of Delta State, is said to have carried out the massive heist over a short period of time.

Mr. Wilson Uwujaren, EFCC spokesman, said: “They most likely got through to [Uyoyou] because he’s an IT person in the bank. One Saturday, he took the ‘cyber gang’ to the bank under the pretext that he was going to carry out some maintenance work, allowing them access to hardware, and they commenced to penetrate the bank’s database.”

Uwujaren said they then increased the balances of some accounts. Sources told us that no culprits have been arrested yet and the spokesman said “The matter is still under investigation.”

But banking industry sources said that it is an Abuja branch of a new generation bank.

Uwujaren said the thieves have not withdrawn the entire sum stated. “It was in the process of withdrawing some of the money that they were caught,” he said, adding that some of the criminals are being tracked.

For now, the chief suspect Uyoyou could not be found in all the addresses advertised by the EFCC declaring him wanted. At Balogun Akarutu Street, off Tijani Salako, Ile Epo, Ashamu Estate, Ejigbo, Lagos, where Uyoyou claimed to be living, there were two houses labelled as 7a and 7b.

The heist by Uyoyou and Co. is just the latest in a string of major cyber-theft jobs. Figures released by the Central Bank of Nigeria (CBN) show that the nation’s banking sector has lost over N20 billion through internet fraud in 2013 alone. In September of the same year, undergraduates of a Nigerian federal university infamously defrauded Union Bank Plc to the tune of N2 billion.

On the legislative side of things, in 2011 Hon. Bassey Etim sponsored a Cyber Security Bill to safeguard banks and their clients’ funds.

A 15-member cybercrime committee with representation from both government and private sector, was set up with the task of designing solutions for Nigerian internet-based fraud and cybercrime. Upon their deliberations, a ‘Draft Cybercrime Act to the President’, with the committee forming the Nigerian Cybercrime Working Group (NCWG), in order to accelerate the implementation of its Cybercrime research efforts, and to assist the Nigerian National Assembly in the quick passage of a Cybercrime Bill. So far, this is yet to become law.