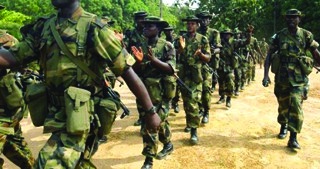 Brigadier-General Olajide Laleye, the director of army public relations has clarified that the “widely reported Boko Haram attack on troops along Okene-Kabba road in Kogi state was clearly not a Boko Haram related incident.

“In reality, the incident was a case of armed robbery attack on troops of 322 Artillery Regiment who were travelling in seven Marcopolo buses to Kontagora for an engagement,” he said.

Laleye explained that the robbers mistook the soldiers for normal civilian travellers, who plied the route.

He said three soldiers, who sustained injuries during the robbery attack, were receiving appropriate medical care and would soon join their colleagues.

“Therefore, the Nigerian Army wishes to reiterate its earlier warning on the danger of publishing unverified reports and attributing all criminal activities to Boko Haram terrorists.

“The inherent danger in this brand of journalism is that it heightens public fear, endangers public safety and creates the wrong impression that Boko Haram is everywhere,” he said.