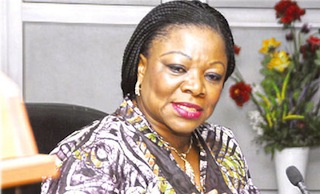 The Niger State command of the Department of State Services (DSS) on Monday paraded Sampson Oghenedoro, a 28-year old staff of the Nigerian Television Authority (NTA) for demanding N50 million from the state government to stop him from broadcasting a story on alleged fraudulent activities within the government.

Parading the suspect at the state command the DSS in Minna, the state of director, Dr. Larry Obiagwu, said Sampson was picked up by his men at the Nnamdi Azikiwe International Airport, Abuja while on his way to Minna to collect the said amount.

Sampson who works with the NTA Asaba, Delta state, as a producer/cameraman, operates under the name Fajiro Oliver, also works with Elomboh Communications, an online news medium.

Obiagwu explained that Sampson and two others, Stanley Gene and Francis Arinze both now at large, co-founded the Secret Reporters Group (SRG) with the alleged sole objective of blackmailing government officials and heads of organisations for pecuniary benefits.

He said in July and August, the suspect alerted top officials of the Niger state government on a threat to expose fraudulent activities taking place within the government or be paid N50 million to drop the story.

Obiagwo, however said that Sampson and his accomplices did not carry out any investigation on the Niger state government and that as a member of staff of the NTA in Delta state, Niger State is not part of his jurisdiction.

Speaking to journalists, the suspect said he had nothing to do with the alleged demand of N50 million from the state government, saying he was only on his way to Minna to balance his story.