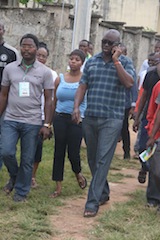 Ayo Fayose receives a phone call during the election

The Attorney-General and Commissioner for Justice of Ekiti State, western Nigeria, Mr. Olawale Fapohunda, has vowed to sue the state governor-elect, Ayodele Fayose, for allegedly ordering that a judge of the High Court in Ado-Ekiti, the Ekiti state capital, be beaten up on Thursday by suspected thugs.

Fapohunda said he was going to personally take up the issue with Fayose’s lawyers for not teaching him what decorum meant at a court premises.

He also said each of those affected by the incident would individually institute a suit against Fayose, adding that many lawyers were affected and that a number of vehicles were destroyed in the attack.

In a telephone interview with our correspondent, the Attorney-General said the attacks by Fayose started days ago, but that the incident of Thursday sealed his level of impunity.

“I will hold lawyers of the governor-elect personally responsible,” he said.

He lamented such level of impunity, saying it portends grave danger for not just the legal profession, but the entire country.

He further described it as a huge tragedy, wondering what would happen to the average Nigerian if judges cannot be protected.

He lamented that while this attack was on-going, policemen at the scene only looked the other way and could not even rescue the judge.

He said such level of impunity shown by the governor makes it obvious that he would have no regard for the judiciary or constituted authority when he is eventually sworn into office.

Fapohunda said he was sure that Fayose’s confidence appears to be that he enjoys the backing of the Federal Government.

“It is amazing and shocking. Regretably, it was in the presence of the police…there is going to be a myriad of suits against him,” he said, while noting that the attack was a dangerous precedent which, if not nipped in the bud, would make anyone who thinks he may not win a legal battle order the beating of lawyers and judges.