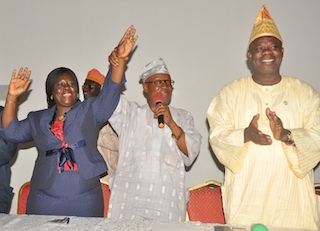 The former Director in Lagos Civil Service was presented to party leaders at the ultra-modern MTR Hall, Ibara Housing Estate, Abeokuta by the chairman of the party in the State, Alhaji Roqeeb Adeniji.

Princess Yetunde Abosede Onanuga, nee Fabanwo, 54, was accompanied by her husband, Otunba (Engr.) Abiodun Onanuga, who is the Otunba Anikilaya of Ijebuland.

Her husband is also the Giwa (President) of the age grade group of Bobakeye Akile Ijebu and he is also Managing Director of NUGACON Group of Companies.

Her emergence therefore provides a balance in terms of geo-political consideration, gender and religion.

During the last primaries of the party, the Remo bloc produced the party’s senatorial candidate, Chief Dapo Abiodun, who is the Managing Director of Hayden Petroleum and he hails from Iperu Remo in Ikenne local government area of the state.

Yetunde Onanuga, however, is by origin from Ijebu north local government and her husband is a ranking member of the royal court of the Awujale of Ijebuland in Ijebu Ode local government, the political headquarters of Ogun East Senatorial District of the state.

Her mother is also a Princess from a ruling house in Akaka town in Remo area, therefore, she has a link with all the sections of the Ogun East Senatorial District.

A devout Christian and mother, Mrs. Onanuga is expected to complement and provide support for the energetic, dogged, progressive and indefatigable governor of Ogun state, Senator Ibikunle Amosun as the administration moves into the critical stage in the implementation of its Mission to Rebuild Ogun State.

As an experienced public servant, having risen to become a Director of Finance and Administration in the Lagos State public service, she is expected to deploy her experience in public administration for the benefit of the Ogun State government if elected deputy governor.