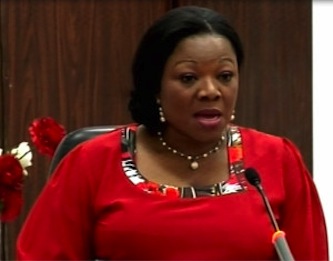 Marilyn Ogar, spokesperson of the DSS

The Department of State Services (DSS) has warned political office holders not to hide under the privileges of their offices to make utterances that were against the general interest of the nation.

In a statement issued by the Spokeswoman of the service, Ms Marilyn Ogar on Monday in Abuja, the Service warned that such utterances would no longer be tolerated.

Ogar said the attention of the DSS had been drawn to inciting and unguarded statements and utterances by some politicians ahead of the 2015 general elections.

She added that “of particular interest is the statement of a serving governor calling on men of the armed forces to rise up in protest against constituted authority.”

The spokeswoman said such were made with the intent to undermine the government of the Federal Republic of Nigeria. “Such actions are irresponsible, selfish and against our collective wellbeing as a nation.

“It is noteworthy that similar unguarded provocative statements by politicians in the past had encouraged violence that resulted in loss of innocent lives and property.

“It is pertinent to note that no Nigerian is above the laws of this land.”

According to her, this statement serves as last warning to those seeking to truncate the nation’s democracy by their careless and mischievous utterances and urge them to retrace their steps immediately.

“This Service and indeed all security agencies will not rest on their oars and are committed to the successful conduct of the 2015 general elections in Nigeria,” she added.