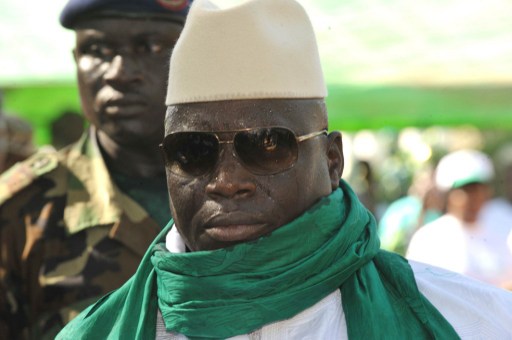 Gambia’s President Yahya Jammeh said he was returning home from Chad late on Tuesday, after gunfire erupted around the presidential palace in the Gambian capital of Banjul last night, according to Reuters.

The government denied reports of an attempted coup, but a diplomat said gunmen had attacked Gambia’s State House. Although shooting had died down, a senior West African diplomat told Reuters gunmen controlled parts of the capital on Tuesday.

Jammeh was abroad, either in France or Dubai, when the violence broke out. Callers on opposition online radio stations urged residents to rise up and keep him from returning.

He landed in N’Djamena, the capital of Chad, late on Tuesday in a plane bearing the presidential emblem, then took off at 10:05 p.m. (2105 GMT) after a refueling stop. He told Chadian officials he was returning home, a senior Chadian official told Reuters.

“He is going back home,” said the official, who declined to be named.

Jammeh, 49, took power himself in a coup 20 years ago and since then has stifled dissent in his tiny, impoverished West African nation. He has come under increasing criticism from abroad over issues ranging from human rights to his claims that he can cure AIDS.

On Tuesday, state radio played traditional music and an announcer read a government statement playing down the incident.

“Contrary to rumours being circulated, peace and calm continue to prevail in The Gambia,” it said. “(The) government would like to urge the public and all businesses to continue with their normal activities.”

Gambia, a splinter of land wedged into Senegal, has ocean beaches that attract tourists, particularly during the northern hemisphere’s winter. They include about 60,000 Britons a year. The British Foreign Office advised its citizens to stay indoors and avoid public gatherings.

In Washington, the U.S. State Department said it was aware of reports of a coup attempt in the country. “We strongly condemn any attempt to seize power through extra-constitutional means. We regret the loss of life and call on all parties to refrain from further violence,” it said in a statement.

Witnesses in the centre of Banjul, situated on an island and connected to rest of the city by the Denton Bridge, said security forces were stationed on street corners and were patrolling after hours of shooting early on Tuesday.

Banks and other offices and surrounding neighbourhoods remained closed. Residents locked themselves indoors.

A French Foreign Ministry spokesman said Jammeh was not on an official trip in Paris and diplomatic sources said there was no indication he was in France on a private visit. Gambian state television said at the weekend he had travelled to Dubai.

Earlier this year, the European Union withdrew millions of dollars in aid shortly after Jammeh signed into law an act that could imprison homosexuals for life. In 2012, he was criticised for executing nine people being held in prison.

In recent years, he has frequently reshuffled senior military and civilian officials, a policy that has prevented potential rivals accruing power but has also stoked instability.