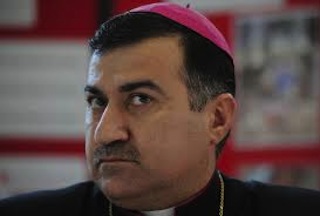 An Iraqi archbishop called for military action in his homeland in a speech to British lawmakers on Tuesday, and warned the Church of England’s general synod that Christianity in Iraq could become extinct.

“As a Catholic, I find it hard to say, but I want military action. There is no other way now,” Bashar Warda, the Archbishop of Erbil, was quoted by the BBC as telling parliamentarians on a visit to London.

Speaking to religious leaders later Tuesday, he said there was now a threat of the “extinction of Christianity as a religion and as a culture” in Iraq.

Christians in Iraq “do not have much time left,” he said, adding that the conflict with the Islamic State group had created a crisis of “chronic urgent need”.

“The future will come, one way or the other, and for us this means waiting to see what sort of aid, whether military or relief, arrives,” he said.

“Our vibrant church’s life is dissolving in front of our eyes,” he said, comparing the plight of Christians in Iraq to World War II genocide.

There is a long history of trauma for Iraq’s Christian community, which once numbered more than a million and is one of the oldest in the world.

The 2003 US-led invasion of Iraq ended Saddam Hussein’s disastrous rule, but also turned the country into a battleground, unleashing a wave of bombings and killings by militants in which Christians were often targeted.

While violence fell sharply in the years after the 2006-2007 peak of Iraq’s sectarian war, it surged again from April 2013.

Then came the IS-led offensive, which Chaldean Patriarch Louis Sako says has displaced some 150,000 Christians.