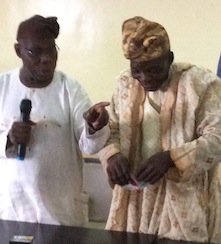 Former Nigerian president Olusegun Obasanjo has dumped the ruling Peoples Democratic Party (PDP), stating that, he is no longer interested in the party.

He reportedly tore his PDP membership card but has not declared his interest to join any other party.

Here are pictures from the press conference.