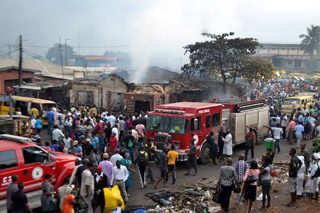 A petrol tanker fell off the bridge, exploded and burnt 21 cars, 6 tricycles, 44 shops, five houses and other valuables in the early hours of Tuesday at Iyana Ipaja area of Lagos State, southwest Nigeria.

An explosion rocked the area around 1:30am causing pandemonium as residents rushed out of their homes only to discover that a tanker had fallen off the Iyana Ipaja bridge.

Balls of fire enveloped the area as the tanker, with registration number Lagos KJA 238 XN conveying 33,000 litres of premium motor spirit, PMS, fell from the bridge and spilled its contents.

Residents of the area ran for safety as fire engulfed houses and cars. No life was lost.

Lagos State Governor, Akinwunmi Ambode visited the scene to sympathise with those who lost their properties.

Ambode said he was happy there was no loss of lives but lamented the magnitude of destruction by the fire.

The governor decried the lawless activities of tanker drivers, saying that he could no longer tolerate their recklessness which had often led to loss of lives and properties.

He said government would address their recklessness as two other cases of tanker accidents were reported last night.

“As at the last count, the agencies have been able to report that everything has been put under control. We’ve also recorded two other incidents, just like this one in other parts of Lagos overnight; one in Badagry and the other one in Ojo area.

“While we are trying to address all that, we would ensure that we help all those who have lost properties and their shops to get back to their normal businesses.

“I would receive the report of the fire incident in the next 48 hours and we would ensure we do something positively to ensure that life can return to normal,” Ambode said.

According to a resident, Babatunde Onile who resides at 2, Oremeji Street, “we were sleeping when we suddenly heard an explosion around 1:30am. We saw fuel flowing in the gutter followed by fire. We all ran for our dear lives. Some people jumped through the fence to escape from their houses.”

He described the incident as tragic, calling on government to come to the aid of the people.

He added: “When the incident occurred, area boys entered shops of people to loot their belongings. They made away with generators and flat screen television.”

Another eye witness, Samson Adebanjo who lives at 11, Dakare Dafojo Street, said the explosion rocked the area around 1:30am.

“We were sleeping when it happened. Everybody rushed out when they heard the explosion. We could not escape through the main door, so we had to scale the fence with our children to escape. We want government to compensate us,” he said.

Director, Lagos State Fire Service, Rasak Fadipe told P.M.NEWS that the tanker fell from the bridge around 1:30am and exploded, saying that his men arrived the scene on time to battle the fire which was eventually put out in the morning.

He disclosed that 21 cars, six tricycles, 44 shops and three houses were burnt by the inferno which engulfed five streets in the area. The streets are Adebanjo, Oki, Oremeji, Jafojo and Lagos-Abeokuta Road.

He praised members of the community for informing the fire service on time, as the agency was able to mobilise three Fire Stations-Alausa, Ikeja and Agege.

Fadipe said the fiire stations mobilised five fire trucks conveying cumulative 50,000 litres of water to battle the fire and succeded in putting it out.

Officials of the Fire Service, Lagos State Emergency Management Agency, LASEMA, Civil Defence and the police were at the scene to maintain law and order.

Femi Giwa, Head of Operation, LASEMA said his men arrived the scene on time to battle the fire, but said five houses were burnt.

He disclosed that 14 people who were injured had been treated and allowed to go back home.

There was traffic gridlock on the Iyana Ipaja bridge as the police cordoned off the bridge during the period the burnt tanker was about to be evacuated from the scene.

Thousands of onlookers were at the scene and gave the police tough time to disperse. Many took photographs and video with their phones just to display them in the social media.

Lagos Commissioner of Police, Kayode Aderanti, who was also at the scene said “we thank God that we did not have any fatality, but we had some casualties.

“The role of the police is to ensure that we investigate the remote and immediate cause of this accident and bring to book whoever is responsible for it.”

Human rights activist, Comrade Declan Ihekhaire who informed P.M.NEWS about the incident early Tuesday, said his father in-law’s car was among those burnt.

Alhaja Munirat Usaini, who sells Islamic wares at the scene of the tragedy said she lost about N8 million worth of goods.