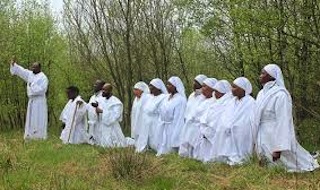 The police from State Criminal Investigation Department, Awka in Anambra State, eastern Nigeria, have commenced investigation into an alleged rape of a housewife in a farmland in Umuchu town, Aguata Local Government by a white garment prophet who is the elder brother to the victim’s husband.

The investigation followed a petition written by a group known as Human Rights Awareness Initiative and Road Safety on behalf of the victim to the Commissioner of Police, Anambra State Command.

The victim, Mrs Chinasa Okoronkwo, alleged that Prophet Pius Okoronkwo raped her in a farmland where she went to farm after she escaped incessant sexual harassment by him.

The suspect, who is the founder of Covenant Sabbath Mission Yaweh church whose headquarters is located at Umuchu, denied the allegation and said it was a ploy to blackmail him after sponsoring the marriage between her his younger brother.

The woman admitted that he was one of those who sponsored the marriage and said he had another motive for sponsoring the traditional wedding.

She said her ordeal started after their traditional marriage when Okoronkwo approached her and told her that despite the fact that he married her to his brother, the job of impregnating her will be his responsibility.

She said despite the fact her husband is poor, she refused such demand because her husband was alive and fit to impregnate her.

Chinasa said the harassment continued until he allegedly raped her in the farmland while threatening to kill her if she refused.

She said she had to seek the help of the human rights NGO to seek for justice.

She narrated that after Okoronkwo allegedly raped her, he sued his influence to gang-up with some people and without her husband’s consent, and chased her away from her matrimonial home to cover his track.

The Human Rights Awareness Initiative and Road Safety, Comrade Gilbert Obinwa, who confirmed receiving a complaint on the issue after the woman came to their office and they had to write the petition to the Commissioner of Police.

He said what happened to the woman was height of injustice and asked the police to investigate the allegation and prosecute the offenders.

He noted that there was a grand conspiracy to ill treat the woman because her husband was a peasant farmer and could not do anything.

The Okoronkwo, who denied the allegation of rape and sexual assault, said it was the kinsmen that asked the woman to go to their home in Umumaoku town in Aguata to bring her relations because of her bad conduct so that the two families would resolve the matter peacefully.

At the SCID, the police confirmed the incident and said they have already commenced investigation into the matter.

A police source said after investigation and if a case of rape was established, the prophet would be prosecuted.