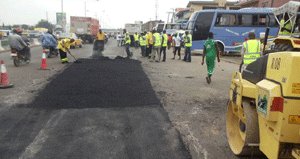 Mr. Odey Ogar, the Taraba State Maintenance Engineer with the Federal Roads Maintenance Agency (FERMA), on Friday said the agency had embarked on refilling 10 highway- washouts in the state.

Ogar, who spoke with journalists in Jalingo, capital of Taraba, said the refilling would prevent the roads from total collapse.

He said the “dangerous washouts” were identified on Jalingo – Numan, Kumbo-Donga, Zing-Yola highways, among others.

“As you can see, this is a direct labour intervention that begins with controlling the erosion beside a triple cell culvert at Jimlari on Jalingo- Numan Road.

“Without the intervention, this critical economic road would have been cut off because the culvert cells were blocked, and flowing water was diverted to the road embankment.

“The situation is now under control because we have built an earth retaining wall and provided an alternative channel for water to flow,” Ogar said.

The expert, who said the agency would refill the remaining washouts, explained that work had only begun on those posing greater threats to the highways.

The News Agency of Nigeria (NAN) reports that the intervention also includes the refilling of pot holes on the 72-kilometre Jalingo-Mutum-Biyu Road.