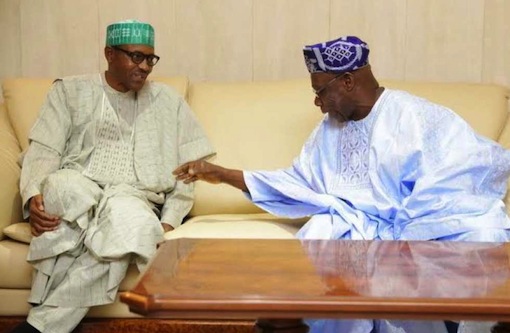 President Muhammadu Buhari has expressed concerned over the unfolding political situation in Guinea Bissau following the dismissal of the Prime Minister, Mr Domingos Pereira, and his cabinet by President Jose Mario Vaz.
This is contained in a statement issued in Abuja on Friday by the president’s Special Adviser on Media and Publicity, Mr Femi Adesina.
It stated that Buhari had already sent former President Olusegun Obasanjo as his Special Envoy to mediate and help find a solution to the crisis brewing in that country.
According to the statement, Buhari’s peace mission is in demonstration of true African solidarity and brotherhood.
The statement maintained that Obasanjo had embarked on the first leg of his mission by consulting with the current Chairman of the ECOWAS Authority of Heads of State and Government, President Macky Sall of Senegal in Dakar on Thursday.
“It is regrettable that while Chief Obasanjo was still consulting with President Sall, President Jose Mario Vaz of Guinea Bissau proceeded to appoint and swear-in a new Prime Minister in the person of Mr Baciro Dja, a development that has worsened the political situation in his country.’’
Buhari appealed for calm and called on the leadership in Guinea Bissau to exercise utmost restraint and ensure the maintenance of law and order as efforts continue to resolve the current crisis.
The president, particularly, urged the leadership in Guinea Bissau, including the military, to ensure respect for constitutional order, sanctity of life and safety of citizens.
He also enjoined them to avoid taking any further action that could threaten the fragile democratic institutions recently established in the country.
Tags: