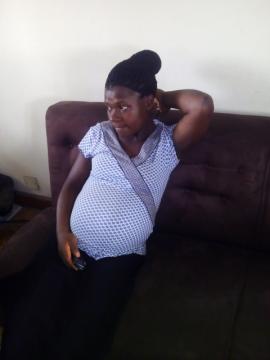 There was a show of shame recently at the premises of the Economic and Financial Crimes Commission, EFCC, after one of the operatives allegedly battered a 19-year old canteen attendant he allegedly impregnated in Lagos State, western Nigeria.

The teenager was allegedly assaulted at the EFCC office located on Awolowo Road, Ikoyi, Lagos where the operative works as exhibit keeper.

The victim, Blessing Nwokpa, who was a canteen attendant at the EFCC premises was allegedly impregnated by the EFCC operative identified as Okeke Edward, who refused to take responsibility for the pregnancy.

P.M.NEWS gathered that rather, Okeke allegedly offered her money to terminate the pregnancy but Blessing refused.

For her obstinacy, Blessing who was living with Edward as a squatter, allegedly became an object of battering and assault by him.

Edward allegedly threw her and her belongings out of his house and sent her away from his house at 23, Akinseji street, Fadeyi.

Blessing, who is now seven months pregnant, became homeless and could not feed herself after she was sacked from the canteen when she became pregnant.

Frustrated by Edward’s action, Blessing went to EFCC office where Edward works to request for money to feed and for ante-natal care.

When Edward saw her at EFCC premises, he allegedly descended on her and battered her to the extent that she collapsed and was later rescued.

Following the assault, Blessing went to the Legal Aids Council of Nigeria whose office is located in Ikoyi and reported the matter.

P.M.NEWS gathered that Blessing was brought to Lagos by her brother and got her a job as canteen attendant at the EFCC office.

While she was there, her brother had accommodation problem and Blessing, who said she was then a virgin, started sleeping at the canteen at the end of the day’s work.

She said when Edward saw her there and asked her why she was sleeping at the canteen, she informed him that his brother had accommodation problem and was tring to get another place.

She said Edward offered to assist her and asked her to be sleeping in his house pending when her brother would get another accommodation.

She alleged that during the night, Edward would lure her into sex and eventually deflowered her and impregnated her.

Blessing said that initially, she did not know she was pregnant and when she was having unusual feeling in her body, she went to a hospital and conducted a pregnancy test and it was positive.

She said she informed Edward about the result of the test and he became angry and gave her N18,000 to go and abort the pregnancy but she refused.

Consequently, she said Edward started beating her and later threw her and her belongings out of his house for refusing to abort the baby.

She said when she became pregnant, she stopped going to work and had no money to feed herself which made her go to his office to seek help.

Blessing said when he saw her in the office on the fateful day, he began to beat her until other EFCC staff and people around came to her rescue.

She said it was the people there that directed her to Legal Aids Council to complain and seek their assistance.

She said when the Legal Aids Council invited Edward to settle the matter, he told them that he would not come and boasted that nothing would happen.

Blessing lamented that she is starved daily and she was not asking him to marry her rather, she wants him to take care of the pregnancy and after she delivers, she would look for ways to move on with her life.

When our reporter visited the EFCC to meet Edward for comment, our reporter was told that he was not in the office.

When he was contacted on phone, he refused to pick his call.

He also did not respond to text messages sent to him by our reporter.

P.M.NEWS gathered that Blessing has been referred to an NGO located in Ogba area for assistance.