Man attacked after catching lover with his mom 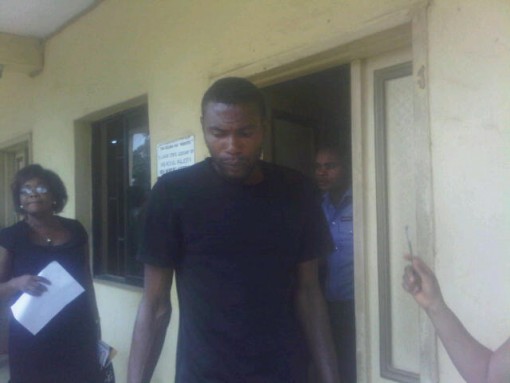 A 27-year old man, Fredrick Nicole has been confined to a hospital bed after he was attacked and seriously injured by a 30-year old lover suspected to be making love to his mom in their home in Lagos State, western Nigeria.
He was brutally wounded by the attacker known as Ismaila Ibrahim and one of his hands got broken during the fracas that ensued between them.
The incident happened at their residence located at Idimu road in Ejigbo at about 4 p.m. on 9 February, 2016.
P.M.NEWS gathered that the victim suffered his fate after he met Ibrahim who he alleged had been sneaking into their house at odd hours.
Following the assault, the police arrested Ibrahim and charged him before a Lagos court for allegedly causing Nicole grievous harm and injury.
According to the police, Ibrahim allegedly attempted to use a pestle to hit Nicole on the head when he was caught and challenged by the victim.
He missed his head and the pestle landed on Nicole’s left hand and broke it. Nicole who is a half caste has been taken to an Orthopaedic hospital where he is being treated.
The matter was reported to the police at Ejigbo division and Ibrahim was arrested and detained at the station.
P.M.NEWS gathered that Nicole’s mom married an expatriate before they separated and since then she had not re-married.
It was gathered that when Ibrahim was detained at the station, he reportedly confessed that Nicole’s mom was his friend.
He also told the police it was the victim that first attacked him before he retaliated and did not mean to inflict severe injury on him.
P.M.NEWS also gathered that the mom confirmed to the police that Ibrahim was her lover and wanted the matter settled out of court but the police refused because of the severity of the assault.
Ibrahim was charged before Magistrates’ court sitting in Ejigbo where he is facing a three-count charge of assault, grievous injury and wounding under the Criminal Code.
When Ibrahim was arraigned, he pleaded not guilty.
The presiding Magistrate, Mr A. A. Fashola granted him bail in the sum of N100,000 with two sureties in like sum.
Ibrahim was remanded in prison custody at Kirikiri pending when he will perfect his bail.
The matter was adjourned till 9 March, 2016.