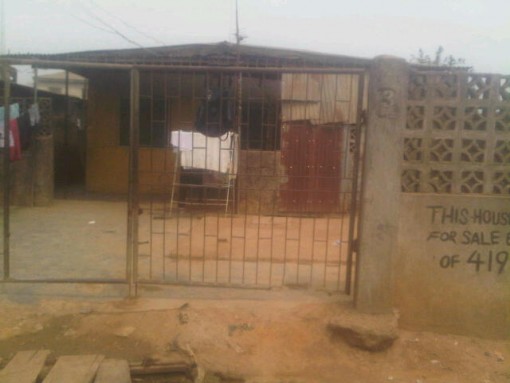 The house where Pastor Victor ran out naked

Residents of Wahab Close in EJigbo in Lagos State, western Nigeria, were stunned by the drama that played out in their area after a pastor who sneaked into a man’s house to make love with the man’s wife was caught in the act.

The pastor, who had already pulled off his pair of trousers and soutane, ran out wearing only his underwear when the man, known as Vitalis Okere, barged into his home.

The action caused commotion in the street as the residents expressed shock over what happened.

P.M.NEWS gathered that the pastor, identified simply as Victor, had allegedly been sneaking into Okere’s apartment and was allegedly sleeping with his wife identified as Chidinma for several months.

While the alleged illicit affair was going on, Okere, who is a security guard and spends much of his time at work, did not know until their 11-year old daughter informed him about what has been going on behind his back whenever he went to work.

P.M.NEWS gathered that Okere works as a guard in a company and he leaves home in the afternoon and returns the following morning.

While he is away at work, Victor takes over.

The pastor would sneak into Okere’s home to meet Chidinma when their five children had gone to school.

P.M.NEWS gathered that whenever the children return from school late in the evening, they would stay outside while Victor and their mom, Chidinma would lock themselves inside their room pretending that they were praying.

The eldest daughter who did not like what was happening informed their dad.

On the day the nemesis caught up with the adulterous pair, Okere dressed up and told his wife Chidinma that he was going to work and would return the following morning.

Victor as usual came with the hope that Okere had gone to work and would not be around.

While the pastor and Chidinma locked themselves inside, and the children were outside, Okere came back in the evening and knocked at the door and asked Chidinma to open the door for him.

While it was taking them much longer time to pen the door, Okere forced the door open and Victor rushed out in his pant, leaving behind his pair of jeans trousers and soutane in the room.

When Okere confronted his wife about what she was doing with the pastor behind closed doors, she said they were just praying together.

Okere then took the clothes and went to the police station and reported what happened.

The clothes were kept as exhibit at the station and Chidinma was asked to produce Victor who is now on the run.

When our reporter visited the house where the incident happened, the eldest daughter who revealed the whole thing to their dad said her mom travelled to their village in Imo State on Wednesday over the matter.