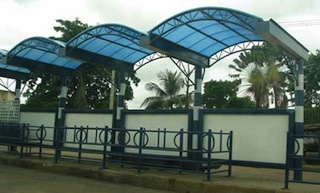 Residents and commuters passing through Oyingbo, a suburb of Lagos, western Nigeria, have called on the Governor of Lagos State, Mr Akinwumi Ambode to direct officials of the Ministry of Environment and emergency response team to remove the decomposing male corpse at Oyingbo BRT Bus stop before an epidemic breaks out in the area.

Some residents who spoke with P.M.NEWS correspondent at Oyingbo bus stop Tuesday said when they sighted the corpse on Sunday night they called the emergency number 767 to inform them about the presence of the corpse and a female voice responded and said that they were coming to pick the corpse, but they never showed up till Tuesday morning.

They appealed to Governor Ambode to sanctioned the emergency workers for their nonchallant attitude to work and dragging the image of the State Government in the mud.

A resident of Oyingbo, who identified himself as JeJe said, “When I came across the male corpse on Monday afternoon I called the emergency number 767 with my number to inform them about the presence of a decomposing male corpse at the BRT bus terminal, Oyingbo, Lagos and a female voice responded and said they will be at the scene in 20 minutes time, but they never showed up till Tuesday morning. And the corpse has started decomposing and the offensive odour oozing out is polluting the environment and it could cause epidemic in the area.

“I am now appealing to Governor Akinwumi Ambode to direct the emergency workers to urgently remove the corpse to safeguard the health of residents in the area and more importantly the school children that board vehicles at the BRT Bus terminal to school daily.”

Mr Anthony Ugochukwu said “the Lagos State Government has invested heavily in sustaining a cleaner environment, but it is unfortunate that those who are being paid with tax payers’ money to enforce the cleaner environment are the ones dragging the image of the government in the mud by deliberately refusing to evacuate a decomposing corpse from a major bus stop for three days.

“I am appealing to Governor Ambode to deploy people to the emergency office to download the call logs of the people that called the emergency workers from Oyingbo area over the corpse and sanction or sack them for refusing to serve the public as a deterrence to others.”

When P.M.NEWS correspondent visited the scene on Tuesday morning at about 6 a.m., the corpse was still there polluting the entire Oyingbo Bus stop with foul odour.

When the emergency number 767 was called, a female voice responded and said “please, bear with us as our officials are on their way to pick the corpse”. But they had not showed up at of 7 a.m. when our correspondent left the scene.