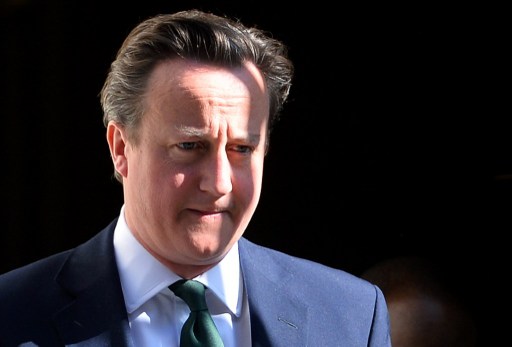 Thomas who has taken a rather stern and mind-boggling position on the administration of David Cameron warned that the Queen has powers to disband Cameron’s government.

Known for her open criticism of the present UK government, Prof Thomas claimed that it is an open-secret that the present conservative style of governance being led by David Cameron, British Prime Minister is built on injustice, evil, oppression, enslavement mentality of the coloured people with the sole intentions to practicing terror and tyranny against the people of Commonwealth citizens. Certainly, this secretive group Cameron belongs believe society is an organized conspiracy to oppress, rob and degrade the coloured people.

She flayed the wickedness ongoing in British Government under the watchful eyes of Cameron and why his government would be abolished on or before 24th April.

In her press statement issued in London she said: “Your policies are very contagious and destructive to human race, certainly denial is not an option. My press statement dated 22/11/2015 clearly defined Constitution of Democratic System of Government Principles and practice as taught by the founding fathers headship Thomas Jefferson, the third President of United States. Your party has been a very destructive one-killing the welfare and wellbeing of the coloured people; and you will agree with me it is fair to ask the Queen Elizabeth II to use her Monarchical powers to abolish your leadership or alter it by simply transferring powers to Labour Party headship.

“Monarchical Throneship of Queen Elizabeth II, has powers to abolish your leadership. This may not have been used before or such redress of government abolishment has not been used since the 16th Century after the beheading of the King Charles I, though his death gave rights to ordinary men like yourself the privileges to come to power through enacting the Bill of Rights 1689, she said.

Adding that, “As the Chairman of The Commonwealth Liberation Party (TCLP) and the chieftain of Commonwealth Treaty Alliance Commission, I tell you today such powers to abort your government will be executed on or before the 24 of April 2016, if you and your cabinets ministers fail to behave yourselves, stressing that, “Mr. David Cameron, know your government could be pardoned from
penalty of guilt as your ignorance and lack of political mythology could eliminate your accountability to the destructive values brought upon the people of the Commonwealth.

“Cameron how dare you slander citizens of the Commonwealth Nations with Immigration Law, a sham legislation knowingfully well Britain never had a permit to make 53 Commonwealth nations their colonies but instead through force mastered them using ferocious tactics and death. We should be fair to the cores values of Commonwealth nations who Britain bothered their isolation and forcefully coerced to accept the British Heritage in 15th Century ago.

In hurtful tones, her letter read: “Mr. Cameron, know it today United Kingdom is indebted to the Commonwealth nations and their citizens. Until the 51 countries of African and Asia continent realise full civilization, their citizens must continue to have unlimited access to travel to the United Kingdom and the Immigration confraternity laws debarring their rights must be abolished without deliberation or compromise. To this end, all ‘immigration detention centers in the United Kingdom must be demolished
and all the German investors having shares in the Immigration Business and Services of Border Control and Technological Facilities should be paid back their investment as they must now find other trade to make their gains because the Commonwealth Citizens Detention is not a sector for investment. Simply do not say no money to pay them. The process is simple, just print more money and pay them as money is a piece of paper meant to fool the governed because politics is a ghostly operations.

“United Kingdom found riches and greatness in the 15th Century from the Commonwealth countries and their citizens and till date, your government is still in continual receipt of royalties from these poor slaved continent of Africa and Asia, yet your conscience fears no retribution, because God created them to be of less values to the white race. This should not be a bias reason because humans have bigger brains, so the conscience of guilt should supersede conscience of destruction of the human race and for this reason slavery as a business was abolished in United Kingdom and America.

Standing on truth, Professor Thomas dares British Prime Minister when she explained: “Mr. Cameron, I say unto you verily, verily, verily, your government will be disbanded and disgraced out of Number 10 Downing Street. Know very well as I said this words to you, we are equal in powers of governance and the difference is your vote has given you access to print money and control UK money supply and economy. The only reason you may gullibly assume you are more superior than myself is because the police, army, navy, immigration and crown servants are paid by your government.

“Mr. Cameron I am your competitor and as an opposition government, we “The Commonwealth Liberation Party (TCLP)”, are not readily bothered about who rules. What matters is who rules the people of United Kingdom must have the Knowledge, principles, respect, compassion, protection, appreciation and values to the people with rights of sovereignty.

“Any Ruling Government must respect human values, integrity and dignity of human substance. If you read ‘TCLP’ teachings and doctrines, you will see our generosity overview in a reflection, as I will expect you this year to get some serious education and your cabinet ministers should equally go for mind development training on humanity courses or else they could possibly go to jail ‘en masse’ in the next 15years because of the ‘enormous and ferocious atrocities’ they have committed in their term in government. Money is simply irrelevant as you know the tricks in government. Money is a piece of paper and the fact your Conservative Party has made it more important than human lives and values, the need of changing school syllabus is essential.

“The amendment of school syllabus is Mandatory, so Students will be taught Humanity and Human Values as a Course and the Consciousness of Resistance to refuse cash reward in bribery, salary, kind or gifts, if the assignment or task demanded of their services relates to law that devalues, kills or destroy the Elements of Humanity. Mr. Cameron, you will agree with me your
government has gone ‘mad’, starting with the Speech of Mr. Enoch Powel on the 20th April 1968. Watch this on Youtube Channel At:
https://www.youtube.com/watch?v=6gkBr-qvo-4 if it was not taught in your Social Studies.

“Mr. Enoch Powell plot for destruction as a Conservative Government in their Klu Klux Klan Assembly crafted today’s destruction
Operational Code Name called —- Rivers Of Blood Speech. Since 2008, the Coloured People death toll was officiated to us; killed for no just reason over your policies of immigration laws, a sham legislation for no just reason. A Letter from the Immigration Office confirming death toll can be read here: http://www.thecommonwealthliberationparty.org/investigation/ukba-death-affirmation/

Corroborating her view on the use of legislative confraternity by Cameron to kill the Commonwealth people, Professor Thomas said: “Mr. Cameron, your government continues to use legislative confraternity to kill the Commonwealth Nations Citizens in immigration detention centres and prisons. Coloured Men and Women die every day in UK Immigration Concentration Camps. Why have you allowed German Investors in Immigration Affairs? Why are offenses of murder and homicide committed on Commonwealth citizens by your
Crown Servants covered up till date? Why have no persons has been convicted for these deaths? If these deaths were committed by black culprits on white victims, your government will send them to jail for life. So you will agree with me the Justice system has
neglected the Wellbeing of Families of the deceased citizens till date failed to inform their Families and not even bothered to pay them compensation. The Commonwealth Citizens deaths recorded since 1965 to 2015 of their Exterminations in the UK Immigration concentration camps must be revealed to the Commonwealth nations Government. Your government turn a blind eye, yet no one has been jailed for these atrocities committed. The big question is why has your government mocked the justice system because of power intoxication?

She recounts the ordeal of Commonwealth citizens tortured and buried in unmarked graves. “The Commonwealth citizens died in UK immigration concentration camps and buried in unmarked graves. Your government should know what is good for the goose is good for the gander; so wholly in truth of correctiveness, it is advisable your government compile the list of deceased persons and search
for their families for they must be buried befittingly and their families compensated.

“Mr. Cameron, an explanation is needed on why your government have not shown these dead victims respect? Obviously without denial, your Conservative Party fumes with superiority because these dead victims are black and coloured persons, simply your disdain is their blood smells, because if they were white persons, the Queen Elizabeth II would have been told to reassure their families.

“Your government still regard the Commonwealth citizens as slaves and servants. No one in your government is concerned about the wellbeing of noble men your party have locked and incarcerated in immigration concentration camps for no offenses they have committed. You tell me no ‘RACISM’ in the United Kingdom, well know it now it is simply ‘HATISM’.

Famous for her frankness on issues affecting Commonwealth citizens, Professor Thomas revealed clandestine moves by Cameron administration to revoke British citizenship status earlier accorded Commonwealth citizens that had done renunciation. She said: “The introduction of the TCLP Scheme on Renunciation and Proclamation of Nationality as Treaty of Article 15 of UDHR, it was deemed necessary that beneficiaries of this scheme notify the Home Office of their change of Status as British Citizens because the
Passport Office an Executive Agency is now politicized by your government.

“The TCLP for these reasons, introduced the British Commonwealth Nationals Data Enrollment for Commonwealth citizens to grant permissibility to the Home Office to update their information with the Data Entry Department. MY PEN MUST BRAKE NOW’, if not this letter could be 200 pages as there are enormous issues to talk about. I am an eagle eye watching the fashion of your government so expect more teachings from me. Mr. Cameron, your style of government has never been known to the history of United Kingdom
because you lack the International Law Mythology and Treaty Compulsion signed after the Second World War by Prime Minister Churchill which is a Bond.