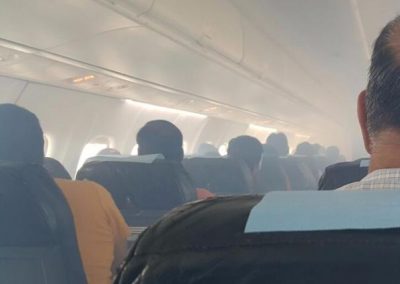 Smoke filled the cabin of the Jet Airways flight from Bengaluru to Mangaluru on Wednesday morning after one of the engines caught fire.

Jet Airways airlines, on Wednesday, said its passenger plane, Flight 9W 2839, with 69 people on board, made an emergency landing after it caught fire soon after taking off from Bengaluru airport in southern India.

It said in a statement that the private airlines operating domestic flight headed to neighbouring city of Mangalore from Bengaluru but
returned to the airport minutes after it took off after smoke was detected in its cabin.

It, however, said there was no casualty, as all passengers and crew members were safe.

“The precautionary evacuation of the passengers and crew was carried out immediately on landing. All 64 passengers and four crew members are safe,” it said.

An Indian aviation official said Bengaluru airport was closed briefly for landing and take-off in the morning due to the emergency landing by the Jet Airways flight.

The official also said that a probe had been ordered into the incident.