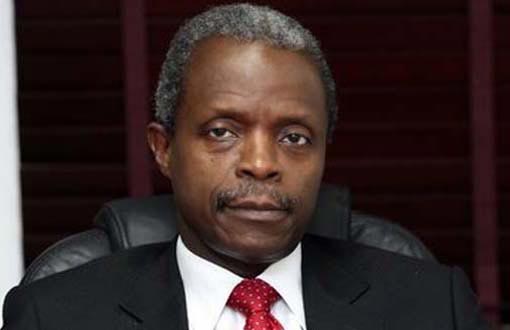 Vice President Yemi Osinbajo SAN has declared that the fight against corruption by the Buhari administration is not one-sided.

Speaking with journalists at the end of the 27th ordinary session of the African Union which ended yesterday in Kigali, Rwanda, Osinbajo described as absurd and without foundation whatsoever the view that the fight against corruption was one-sided.

“I think it’s entirely absurd. I think that view is absurd and without foundation or basis whatsoever. We look at corruption from all possible facets.
If you look at, for example, corruption in the military, from military procurements, obviously the only individuals responsible for that could be persons who had held office within the period in question and that has been done and clearly the opposition was not in the office at that time.

He explained that those who were in office were not necessarily opposition individuals. ”These were Service Chiefs and other personnel who had served for a while,” he stated.

On the fraud and corruption associated with large sums of money given out by the past National Security Adviser to several political figures, Osinbajo said: ”Again these were huge sums of money, over 2 billion US Dollars and the sheer size and the enormity of what we are talking about, must not be diminished in anyway or trivialised in anyway by any suggestion that it is partisan. How? in what way?

”I think those who make that suggestion obviously want to trivialise a very important programme of the government, a very important fight against corruption and also the strong effort to recover huge sums of money that have been stolen from Nigeria.”

On the just ended summit, Osinbajo said it afforded leaders of the continent the opportunity to affirm their commitment to human rights, with special focus on women, and also agreeing to a financing model that makes AU member states more directly responsible for the sustenance of the organization.

According to Vice President Osinbajo, SAN, the summit afforded African leaders the opportunity to review their different national programmes in view of the agenda of the summit, noting that the efforts and programmes of the Buhari administration were well received.

Said he: “I think we’re in a very good place in respect of our human rights agenda as well as in women’s rights, everyone endorsed the lots of serious efforts that we are making in that respect.”

Osinbajo added that there was appreciation from other leaders regarding the 500 Billion Naira Social Intervention Programme of the Buhari administration which focuses primarily on women, including the one million market women, traders and artisans who will get macro-credit loans.

“I think people do appreciate that …and our efforts on Social Protection,” Prof. Osinbajo said.

On issues of peace and security, the Vice President said the summit was also useful, and Nigeria has received “tremendous support from everywhere.”

“Every one is in full support of the efforts that have been made against Boko Haram and other problems in the whole of Africa.”

The summit resolved to hold new elections for new officials of the AU Commission, AUC, as the voting process on Monday could not produce election results that met the required majority according to the AU rules. The AUC is the secretariat of the African Union and led by a Chairperson, and supported by a deputy chairperson and 8 commissioners.

Speaking after the elections in Kigali, Osinbajo described the process as fair and based on the rules of the elections.

“I am pleased with the process. I think the process went very well, the rules were followed and the wishes of the member states were well reflected. The outcome l think is a fair conclusion and it is very clear that the member states will like to see fresh elections, would like to see possibly fresh set of candidates or at least additional candidates to those who have already been nominated. I think it’s a fair process. It went very well.”

The Vice President added that Nigeria has previously suggested that the elections be postponed until January, which is now about when they would be held again.

Explaining the outcome of the summit regarding the AUC elections further, Oinbajo said: “The extension of the election is clearly the product of the rules and the way the rules were interpreted. Why the elections ended the way they did was because many members obviously felt (the need for) …a fresh look at candidature and possibly have a few others.”